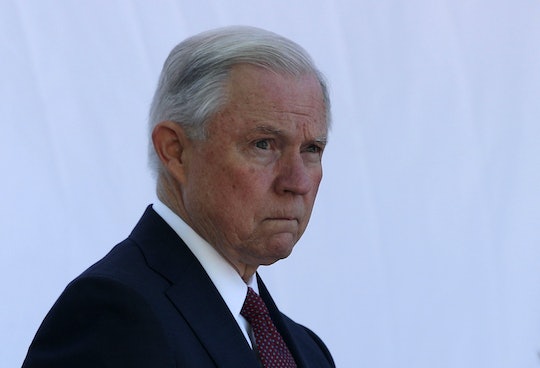 President Donald Trump's attorney general has reportedly suggested that he might leave the administration, citing tension with the president as the main reason that he would go. But how likely is it that he'll leave? Will Jeff Sessions actually resign? ABC News shared the possibility on Tuesday, leaving many to wonder how committed Sessions is to staying on board. Romper has reached out to The Justice Department for comment but has not heard back at this time.

UPDATE: In an email to Romper, Justice Department spokespersons declined to comment on reports that Sessions had considered resigning his post.

EARLIER: Sessions' relationship with Trump soured early on in Trump's presidency. Last year, Sessions failed to disclose past meetings with Russian Ambassador Sergey Kislyak during his Senate hearings. Though he insisted that these meetings had nothing to do with Trump's campaign, in March, Sessions recused himself from the ongoing investigation into Trump's pre-election Russia ties. This decision did not sit well with Trump. According to ABC News' sources, "the recusal is one of the top disappointments of [Trump's] presidency so far," and has caused tension within the administration — so much so that Trump has allegedly "lashed out repeatedly at the attorney general" while reportedly insisting that Sessions' recusal may have caused the deepening of the Russia investigation.

The New York Times reported that, despite Trump's anger towards Sessions, sources indicate that he does not plan to fire him. Doing so on the heels of such an investigation — not to mention after his firing of former FBI director James Comey — would paint a very unstable picture of the White House.

Adding to the speculation are Trump's tweets criticizing the Justice Department that, of course, Sessions heads. Knocking the department's decisions and leadership, Trump insisted: "The Justice Dept. should have stayed with the original Travel Ban, not the watered down, politically correct version they submitted to S.C." In another tweet, he reiterated: "The Justice Dept. should ask for an expedited hearing of the watered down Travel Ban before the Supreme Court - & seek much tougher version!"

The Trump administration has a lot to worry about at present, so it's not the ideal time to lose an attorney general based on friction from within. Sessions' alleged take-it-or-leave-it view on his role in the White House shows a lack of faith in where things are headed and, along with that, Trump's leadership.