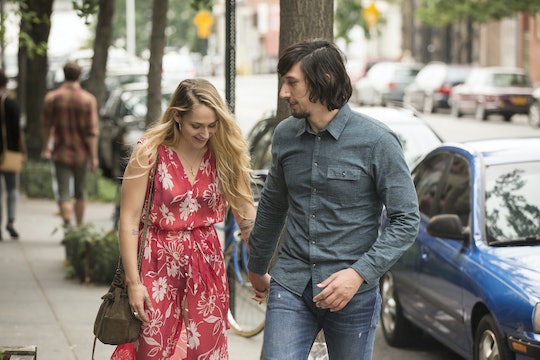 Will Jessa & Adam End Up Together On HBO's 'Girls'? This Relationship Could Be Different

The increasingly claustrophobic nature of television friendships can often lead to some incestuous intra-group dating, and the characters on Girls are no exception. First Ray was with Shoshanna, then Marnie; Elijah dated Hannah in college and then had a drunken hookup with Marnie; now Adam has moved on from Hannah to Jessa. The relationships feel so fragile that you begin to wonder if any of them could last, like the newest one between Jessa and Adam. So, can Jessa and Adam really make it work on Girls?

Adam has pulled his fair share of jerk moves since Season 1, proving himself a less than admirable boyfriend more than once, but he's also not necessarily a bad guy. Jessa is usually defined by just how much she doesn't care, preferring troublemaking to making honest emotional connections. Both character have a lot in common, including an ongoing struggle with addiction, and they've proven that their bond goes deeper than their shared connection with Hannah. But is it something that can stand the test of time? Is it the real thing?

The first hint that there was maybe something different going on with Adam and Jessa came early in the show's fourth season when Jessa stopped during a walk with Adam to pee in the street. She got a ticket, ripped it up, and got arrested — classic Jessa. But, instead of going along with it the way people usually do with her, Adam's (hilarious) low-level discomfort and quiet panic during the ordeal led to him telling Jessa they couldn't be friends because of all the immature stunts she pulled — like getting arrested in the middle of the day for no good reason.

It felt as sudden and painful to the audience as it did to Jessa, and in response she was surprisingly vulnerable with him. She pleaded with Adam to be her friend with an openness that we don't usually see from her. For someone who can dish out harsh truths, Jessa rarely cops to them, which makes her relationship with Adam feel different from anything we've seen with her before.

The fourth episode of the season had Jessa passive aggressively needling a friendship-ending fight out of Hannah, then showing up at Adam's apartment to tell him that she's wanted "this" for a long time. Whether she means Adam specifically isn't spelled out; "this" could just mean the kind of relationship Jessa has never really had. She's gotten married on a whim, but she's never really allowed herself to be vulnerable with someone else. It's new territory for her.

We see that again after Adam and Jessa's charmingly terrible sex; he falls asleep, and she lays her head on his chest with an unreadable expression. It seems like Jessa is fully aware of what a new turn this is for her and she's just as uncertain about it as we are. Relationships rarely last a long time on Girls but this one is different enough that it might have a shot.