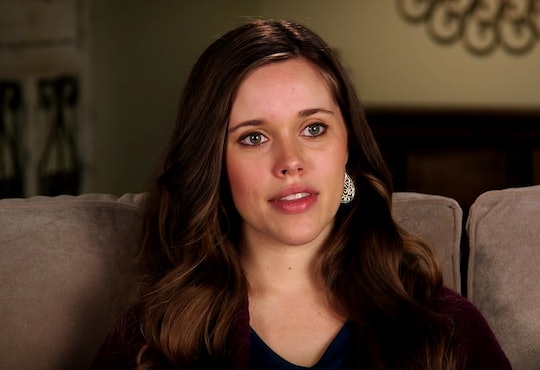 Jessa Duggar's pregnancy with her third child has been exciting for fans to follow. The Counting On star has been open about her pregnancy on Instagram over the last few months, and her followers are loving it. As her due date approaches, it's only natural to wonder if Jessa Duggar will have a baby shower for her third baby and how the ever-expanding family celebrates this tradition. Although Duggar herself hasn't confirmed whether or not she is having a shower, all signs do point to "yes."

Duggar is expecting her third child with her husband, Ben Seewald, according to E! News, and will give birth within a matter of months. When the couple first announced the news, they said that their baby would be due in the spring. But, Seewald's mom reportedly spilled the beans in a Facebook post where she stated that Duggar is due in June, according to OK! Magazine.

When Duggar first announced this news, everyone was celebrating — including her 19 siblings. And it's likely that they will celebrate her third addition to her family within the next three months. Duggar has had a shower before the birth of both of her sons, and the Duggar family is always looking for an excuse to get together.

It's very likely that Duggar will do the same this year with this pregnancy.

But, on the other hand, it's very possible that Duggar will skip out on having a baby shower this year. Because it's her third pregnancy, Duggar probably has everything figured out by now and has everything she needs to raise her child. Baby showers are meant to not only celebrate the mom, but to equip her with the things necessary to bring a baby into the world. And many mothers may only have baby showers for their first baby, according to The New York Times. So, if Duggar doesn't have a baby shower, that is OK.

But Duggar could very well have a "baby sprinkle" — a low key party meant to bring friends together to celebrate the mom-to-be, according to Parenting. The vibe is a little more relaxed, the food is a little less fancy, but the mom still gets to celebrate her new baby. This would be perfect for her.

Duggar's pregnancy has gone by within a blink of an eye. She has posted the occasional shot of her bump on Instagram, but hasn't been keeping fans updated about her cravings, complications, or feelings during this third pregnancy. So fans can only hope that Duggar's pregnancy this time around has been captured on camera for her family's reality show, Counting On. And, if she ends up having one, maybe fans will be able to see baby shower on TV.