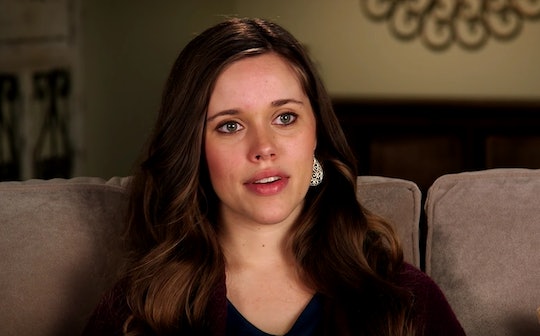 Jessa Duggar Is Adding One More To Her Brood, So Will They Move Into A Bigger Home?

After TLC's Counting On and 19 Kids & Counting star Jessa Duggar announced earlier this year that she is expecting her fourth child, she has made some big changes to her home. Kids can make any space feel smaller, which explains Duggar's approach to getting rid of things. With so many changes happening in her home, fans are likely wondering if Jessa Duggar will move once baby number three arrives. But, from the sounds of it, people can count on her to stay put.

Last week, Duggar took to Instagram where she shared with her followers that she had been nesting, or re-organizing and decorating her home before her baby's arrival later this spring. In two separate Instagram posts, Duggar shared that she is taking a "minimalist approach" to her home, choosing to repaint the walls in her living room to a lighter color (which she did all on her own without the help of her husband, Ben Seewald) and got rid of some of the bulkier items in her home, which she sold on Facebook for a little bit of cash.

"It might not be HGTV worthy, but it's the hub of our home and we feel like it's a massive transformation," Duggar wrote in the post.

Since there is such a big transformation going on in her life and her home, commenters were wondering if the family was looking to expand to a bigger house in the future, too. But Duggar told fans in the comments of the post that they're not moving any time soon.

"We are staying put for now!" Duggar said in the comments of her post. "If we are still here in a few years, we have a carport under our roofline that we may end up closing in for a bit more square footage."

Until that happens, Duggar and Seewald are happy living in their humble abode in Arkansas, which they moved into right after their wedding in 2014.

It's easy to understand why Duggar wouldn't be too quick to leave her modest home — after all, it's super close to Duggar's family house, where her parents and siblings still live, according to InTouch Weekly. Who wouldn't want to give up free babysitting and the opportunity to hang out with your family members at a moment's notice?

Duggar's living room wasn't the only room in her house that got the minimalistic treatment from her. In a separate post on Instagram, Duggar said that she gave her bedroom a fresh new coat of paint and got rid of her chunky bed frame, leaving her room less cluttered. As expected, her fans are loving her approach to her living space.

In both of her room transformations, Duggar has gotten rid of tables and nightstands where clutter can accumulate, therefore leaving her to stress less about having too many things in her home. She'll probably be thanking herself for this in a few months once her baby gets here and she has one less thing to worry about. The less chaos and clutter, the happier she'll be, right?

Although their house might be a little more hectic in the upcoming months, rest assured the family won't be leaving any time soon.