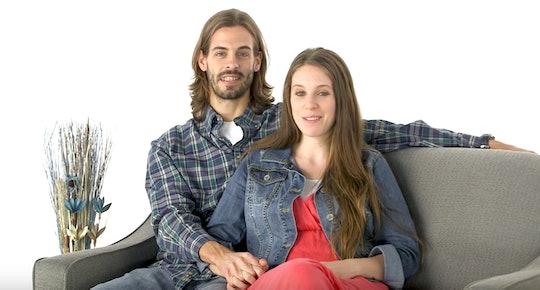 Will Jill Duggar Still Be On 'Counting On' Even Though Derick Dillard Won't Be?

There is something about watching the Duggar family on TV that is so captivating, both on the original reality show that made them famous, 19 Kids And Counting, and the spinoff, Counting On. Maybe it's the fact that by watching Counting On, people are watching the Duggar daughters become independent women for the first time, away from the bustle of their 19 other siblings. Jill, Jessa, Jinger, and Joy-Anna Duggar certainly have their own stories to tell and people can't look away. And now that Jill's husband, Derick Dillard, has reportedly been fired from the show, people are understandably curious about whether Jill Duggar will be on Counting On, even without her husband by her side.

First, a little backstory, in case you haven't been in the Duggar loop over the past few months. In August, Dillard took to Twitter to share his thoughts about fellow TLC star, Jazz Jennings, a transgender teenager. In his tweets, Dillard claimed that "transgender was a myth" among other hurtful things. Two months later, Dillard continued to tweet about Jennings, which some people weren't too happy with. This led TLC to release a statement about letting Dillard go from the show on Saturday, claiming that Dillard's views do not reflect the views of the network.

"We want to let our viewers know that Derick Dillard has not participated in Counting On for months and the network has no plans to feature him in the future," the network said in a statement posted to Twitter over the weekend.

But Jill remains an integral part of the Duggar family and Counting On cast — and fans of the show know that Jill and her husband are close. Without Dillard being on camera, this could very well mean that Jill's appearances on this season of Counting On could be limited. But Jill was on camera this past season of Counting On and has not said or indicated that she won't be appearing in future episodes. Until TLC or Jill says whether she'll be on the show, it's hard to know a definite answer.

While Counting On hasn't aired a new episode for a few weeks, this past season fans were able to catch glimpses of Jill and Dillard as they celebrated their oldest son Israel's second birthday and get settled in Central America. But a lot has changed since those episodes have aired. Since those episodes were filmed, Jill and Dillard have moved back to the United States and have been keeping themselves incredibly busy.

After living in Central America for two years, where they were doing mission work, according to People, the family of four permanently moved back to the United States in August. Currently, Dillard is attending school at the Cross Church School of Ministry and working with international students through the University of Arkansas' ministry, according to their family blog. In the meantime, Jill has been busy raising sons Israel and Samuel. Additionally, the couple also plans to go on several mission trips and serving throughout the year. This definitely sounds like something that cameras will probably want to capture, even if Dillard isn't filming in front of the cameras.

If Jill were to be absent from the upcoming season of Counting On, the absence would be notable. Fans have practically grown up with Jill and she's had quite the journey. Throughout the course of Counting On, fans have watched her fly all the way to Nepal to meet Dillard for the first time, then begin their courtship, get engaged, get married, and have kids together. Not to mention, she was the first of the Duggar daughters (and there are nine of them) to get married and leave home, according to TLC. Needless to say, Jill has been a trailblazer for her other siblings and people would definitely miss her presence on the show, even if there are a lot more Duggar siblings to follow up with.

Hopefully, this past season of Counting On isn't the last time that Jill appears on screen. Although they are married, Jill is a completely separate person from her husband and still has such a big story to tell. Fans can only hope that cameras are there to capture her story.