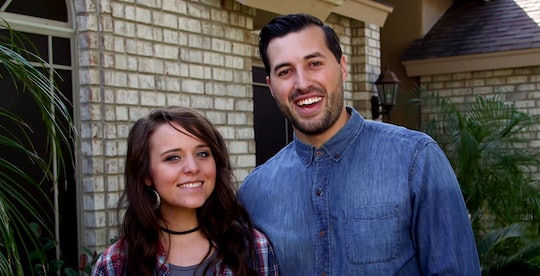 The Duggar family never seems to stop expanding. The family of 19 children between the ages of 29 to 8 has been growing since the late 1980s — and now that those children are having children, the Duggar family is showing no signs of slowing down. Earlier this year, one of the older Duggar daughters, Jinger Duggar, announced that she's expecting her first child with her husband, Jeremy Vuolo, and the news could not have been any more exciting. But there are some details about her pregnancy that fans are dying to know more about — like, for example, if Jinger will have a home birth, like some of her sisters have done as well as her mother.

Since Jinger and Jeremy, who star on TLC's Counting On with the other older Duggar sisters, first made the announcement on Jan. 3 in a video shared to TLC's website, fans have been on the lookout for all things related to Jinger's pregnancy. But most of the time, the Duggars are pretty quiet about their personal matters, choosing to let that play out in front of the cameras when Counting On airs.

So, fans don't really have an idea of how far along the pregnant Duggar women are (Joy-Anna Duggar and Joseph Duggar's wife, Kendra Caldwell, are also both expecting their first children) or know any super personal details about Jinger's birth plan unless she details it on her Instagram or the website she shares with her husband.

But luckily, Jinger has plenty of siblings who have given birth. So, based on that, people can get a vague idea about how Jinger's birth plan might go when she does give birth in the coming months. But Jinger and Jeremy do have plenty of time to decide what to do for their birth plan, since it was revealed that Jinger is reportedly due in July, according to In Touch Weekly.

Jinger hasn't revealed anything about her birth plan herself (and fans should give her a little while, since she announced her pregnancy just four weeks ago). But her older sisters, Jill and Jessa Duggar, have openly talked about wanting home births. And if there is anything that you know about younger siblings, it's that they may very well take the advice or the feel the influence from their older siblings.

Jinger's oldest brother, Josh Duggar's wife, Anna, was the first to give birth to her child at home. Anna has given to birth to most of her five children at home, according to Inquisitr. The first "grand Duggar," Mackynzie, according to People, born in 2009, was born in Josh and Anna's first home together.

Jill Dillard, who has assisted other people with their home births in the past, gave birth to her sons in the hospital, according to Us Weekly, after intending to have home births, but experiencing complications in the process.

Jessa Seewald successfully gave birth to her first son, Spurgeon, at home, according to Parents, but had to be transferred to a hospital shortly thereafter due to reported bleeding. Her second son, Henry Wilberforce, was also delivered at home without any problems in 2017, according to People.

There might also be one very important reason that Jinger would want to give birth at home — because she was born at home, too. Jinger, according to the Duggar Family Blog, was the first child to be born at the Duggar home. Joseph Duggar is only other child, out of the 19, that was born at home. If Jinger's own birth is any indicator, then she might want to follow in her mother's footsteps and try a home birth herself.

While making a birth plan is something that can be a little intimidating, Jinger has plenty of people who can lend her their own experiences.