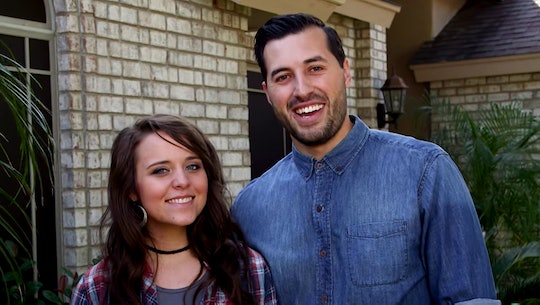 Will Jinger & Jeremy Move To Arkansas Once Their Baby Is Born? The Countdown Is On

Out of all the adult Duggar children, one sister in particular seems to go against the flow of what's expected of her — to a certain degree, at least. And that would be Jim Bob and Michelle Duggar's sixth eldest child, Jinger. Although Jinger played by the strict family rules while she still lived under her parents' Arkansas roof, all bets were off once she married her husband, Jeremy Vuolo, in 2016. Fans of the TLC series Counting On are probably aware the Vuolos currently reside in Laredo, Texas. I would imagine that more than a few fans are wondering if welcoming a child into their family will affect this. So will Jinger and Jeremy move to Arkansas once their baby is born? Because the countdown is on.

Jinger and Jeremy's whirlwind courtship was made official in June 2016, People reported — and Jeremy proposed just one month later. (Of course, she said yes.) In front of 1,000 guests, the smitten couple exchanged vows in November. While this timeline might seem a bit fast for the average couple, it's actually fairly typical for the Duggar family. However, Jinger and Jeremy's life together following their nuptials haven't been quite as "Duggar-esque." For starters, the happy couple was the first to move states away from the Duggars' Tontitown, Arkansas, home on a long-term basis. Jill and Derick Dillard went on mission trips in Central America and Josh and Anna Duggar lived in Washington, D.C., for a few years; but both of these couples ultimately returned to their roots.

Something else that sets Jinger apart from her siblings — aside from ditching the strict dress code that forbids women from wearing pants and sleeveless shirts — is that she and Jeremy"waited" for more than a year before announcing they were expecting their first child in January, 2018. Keep in mind, many of her siblings have announced baby news just a few months after their wedding dates. “The past 14 months have been the best of our lives as we have had the wonderful privilege of beginning our journey through life together in marriage,” the couple told Us Weekly. “We both looked forward to the joys of marriage but neither one of us fully understood just how amazing the start of this journey would be. Truly, the Lord’s mercies are new every morning! Now, the journey has taken an exciting turn: We are expecting our first child!”

In April, Jinger and Jeremy revealed that their first child would be a daughter. “We are so happy to announce that we are having a baby girl!” the excited parents-to-be wrote on their website. “We could not be more excited and are eagerly anticipating meeting our little lady this Summer. We especially love thinking forward and realizing that she will have excellent role models in both of her grandmothers, who cannot wait to shower her with love – Jeremy and Jinger.” The Vuolos also shared a TLC video, explaining how they pulled off the big reveal with the help of a pink neon sign.

With Jinger having a July due date, the official countdown for the arrival of baby Vuolo is officially on. In all honestly, it would make sense for Jinger to want to be closer to her family as she begins her motherhood journey. Few things in life are as invaluable as free babysitting from grandparents, and support from family, after all. Plus, the transition can be such an emotionally- and physically-trying time — so having sisters and her mom right there to step in while she takes a shower, or while the baby takes a nap would be super convenient.

However, logistically Laredo is their home. It's where Jeremy serves as a minister at Grace Community Church. It's where they began and have continued to built their lives together. So it would also make sense for them to stay put in the home they've prepared for their little one. Although it's difficult to say for sure where Jinger and Jeremy Vuolo might end up in the next few years, my money is one them continuing to be the "Duggar outliers" and remaining in Texas. I guess we'll just have to wait and find out!