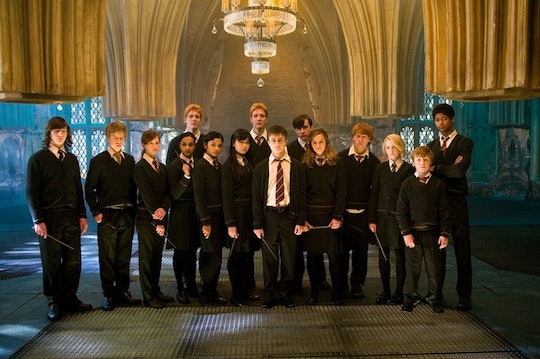 J.K. Rowling been busy lately, writing a play and is promoting an adult novel, but Rowling revealed that she’s working on a new children’s novel, too. Which begs the immediate question: will the Harry Potter characters appear in Rowling's new book? She announced the new book project while speaking to Simon Mayo on the BBC’s Radio 2, according to the Independent. "I have an idea for a children's book, actually I have written part of a children's book that I really love, so I'm definitely going to finish that. There will be another children's book,” she said.

But will it be another Harry Potter book? In addition to the seven-book series proper, Rowling has also written three Harry-adjacent books: Fantastic Beasts and Where to Find Them, based on one of Harry’s schoolbooks from the series (now being made into a film starring Eddie Redmayne, set to open November 2016); Quidditch Through the Ages, a guide to the fictional sport that Harry also read during the first book of the series; and The Tales of Beedle the Bard, a book of wizard fairy tales given to Hermione by Dumbledore during the last book of the series.

Although those books didn’t feature any of the characters we all know and love from the original series, at least they’ve given us the opportunity to slip back into Harry’s wizarding world. So will the new book feature Harry and the gang? "I always said I'm not going to say never because there were things I had in my head about what happened 19 years later,” she says of writing about our favorite wizards again. And it may not be just be the one book, either: “I’m very busy but I’d definitely write more novels as JK Rowling – novels in the plural, I have so many ideas. I sometimes worry I’ll die before I’ve written them all out.” Please don’t leave us, Jo! We can’t live in a world without you and Harry!