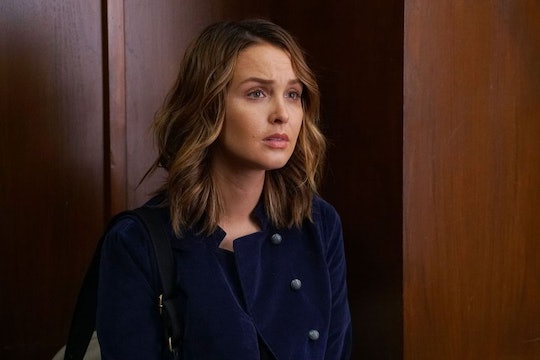 Will Jo & DeLuca Get Together On 'Grey's Anatomy'? These Doctors Definitely Have A Spark

When it comes to Grey's Anatomy, everyone's relationship status is constantly in flux. One day you could be living with your boyfriend on the verge of being engaged, and the next minute you could find yourself single again. That's just how it goes for the doctors at Grey Sloan Memorial Hospital. So now that Alex is on trial for assaulting DeLuca, it's starting to look like Jo and Alex might actually be over. (Sorry, 'shippers.) But does that mean Jo and DeLuca will get together on Grey's Anatomy? With each passing episode, it seems more and more likely.

At the end of Season 12, Alex returned to his apartment to find Jo and DeLuca in what looked like a compromising position. Assuming the worst, Alex beat up DeLuca despite Jo's protests. Now Alex may face felony charges and end up going to prison for a long time. But the meantime, he's currently working in the clinic since he's no longer allowed to perform surgeries. With Alex pretty much out of the picture now, this has paved the way for Jo and DeLuca to become pretty good friends. Since they can only really talk to each other about the pending court case, they've come to rely on each other a bit at the hospital. Plus, DeLuca's still the only person that knows the real reason Jo wouldn't (or couldn't) marry Alex. It's not all that surprising that these two are becoming close. Fans of the show, however, aren't that into it.

Whether or not people ship Jo and DeLuca, it definitely seems like these two will be getting together at some point down the line. At the end of last Thursday's episode, DeLuca accused Jo of being friendly with Alex again. When Jo explained that they were just working on a case together, DeLuca told Jo that she deserved better than the men she's chosen to surround herself with. Perhaps there was an underlying meaning to that sentiment. Maybe what he meant to say what that she belongs with someone like him. If that's the case, though, he clearly wasn't ready to make it known yet. But you could practically see his feelings for Jo written all over his face. So the real question is — does Jo have feelings for DeLuca?

Right now it doesn't seem like it, but she also just came out of long relationship that ended badly and DeLuca is right in the middle of what caused her break-up with Alex. Being with DeLuca would be messy and Jo may not want that right now. Fans will just have to wait and see how this will all play out. One thing's for sure; if Jo and DeLuca do start dating, Alex will definitely be upset. But then again, he did kind of bring this on himself, right? So, if nothing else, you have to appreciate the irony.