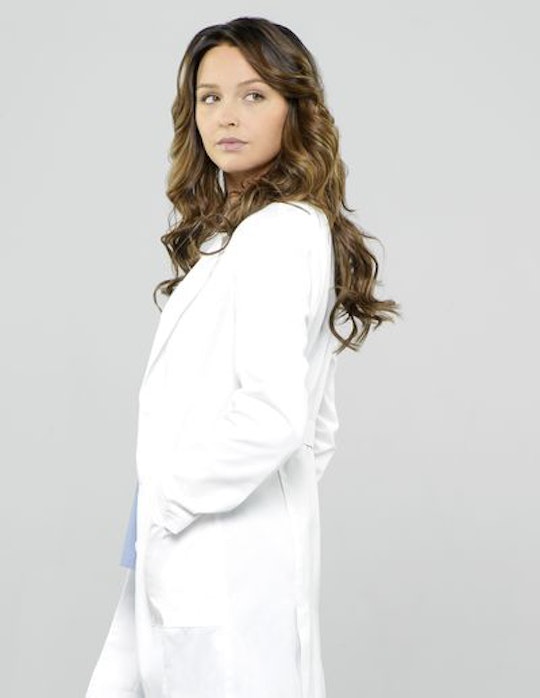 Jo Prepares To Take A Major Risk On 'Grey's Anatomy'

Way back when Alex beat up DeLuca, it was revealed that Jo is secretly married and her husband, Paul Stadler, is abusive, which is why she's been running from him and couldn't marry Alex. Now it looks like Jo is tired of running. So will Jo divorce her husband on Grey's Anatomy? That certainly seems to be her plan right now.

During Thursday night's episode of Grey's, Meredith and Jo performed a major surgery on a judge who specifically works on domestic violence cases. After the judge had his surgery, Jo couldn't help but ask him about her own case. Although the topic of marriage hasn't come back up between Jo and Alex since they broke up and got back together, Jo's past and her husband has continued to impact her life.

Most recently, when Meredith (with an assist from Jo) performed the incredible skin transplant on Owen's sister, Jo had to ask Meredith not to include her in the article because she feared if her picture was put into it, her husband might find her that way. Because, of course, like most characters on this show, he's also a doctor.

Anyway, the recent issue is probably what prompted Jo to ask for advice. The judge was brutally honest, and revealed what Jo has always feared — if she files for divorce from her husband, he will definitely be able to come find her and will most likely attempt to hurt her for trying to divorce him. However, when Jo asked what most women do in her situation, the judge said that many of them take the risk. He then added that more often then not they'd rather take the risk and be free from the abuse than always live in fear.

Similar to those women, Jo decided she's ready and willing to do just that and told Alex as much at the end of the episode. So what does this mean for Jo? Unfortunately, it'll mean she most likely will come face to face with her ex in the near future. Of course, she can get an order of protection or restraining order against him, but as the good judge mentioned, that won't necessarily keep her safe. Abusers don't really live within the lines of the law. Plus, Matthew Morrison, who plays Paul, has already confirmed he'll be returning to the show in a "big role" this season.

Though, this could still happen in a number of ways. Jo and Paul will most likely have to face off in divorce court, as there's no way Paul will just willingly sign these divorce papers. So they'll at least meet then. But as much as I would love to believe Paul wouldn't try anything while in the middle of divorce proceedings, I'm sure he'll attempt to get his hands on Jo, one way or another.

Thankfully, Jo has a big support system who will most likely do everything in their power to make sure she's safe, starting with Alex, who will definitely not let Paul lay one hand on her. Still, the fact that Alex will no doubt throw himself in front of Jo to keep her safe, makes me worry Alex could be in slightly more danger than Jo. That being said, I'm sure these two, along with everyone else, will take every kind of safety precaution to make sure no one gets hurt.

Hopefully, if and when Paul does try something, he won't succeed. For now, I'm just proud of Jo for making this decision. It's a very difficult thing to decide to stand up against your abuser, and not everyone has the courage or ability to do so. Here's to hoping this works out for the better.