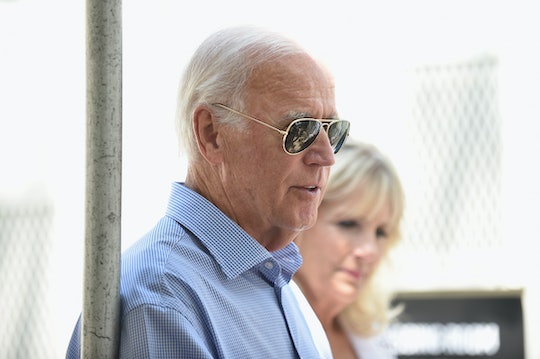 Former Vice President Joe Biden has been a prominent political figure in Washington for decades — a fact that could either help or hurt him if he decides to make another bid for the Oval Office. And while there's no guarantee that Biden will run for president in 2020, he certainly hasn't offered an ironclad assurance that he won't, either. In fact, the newly minted private citizen has been drumming up enthusiasm among supporters that he could take on President Donald Trump for the nation's top job as he makes the interview rounds to promote his new book. So, true to form, Biden enigmatically said that he's "not closing the door" on the possibility that he may do just that in an interview on TODAY Monday morning.

For Biden lovers, it was a fantastic start to the week as well as a jumping off point for another round of the excited (and, at times, exasperated) speculation that he just won't quit. Biden ostensibly made the early morning appearance on the show to talk about his book Promise Me, Dad: A Year of Hope, Hardship, and Purpose with hosts Matt Lauer and Savannah Guthrie, but the conversation inevitably swung to the 74-year-old's political future. And after he ultimately opted not to run in 2016 because of his adult son, Beau Biden's, recent and devastating death from brain cancer (which is what his book is about), Biden had changed his tune a bit, without making any concrete promises:

No, I'm not closing the door. I've been around too long, and I'm a great respecter of fate, but who knows what the situation is going to be a year-and-a-half from now.

Of course, this isn't exactly the first time that Biden has hinted that he may very well be gearing up for a 2020 run, or at least seriously considering it. Just last month, for example, he told Vanity Fair's David Kamp that although he hadn't decided to launch a bid for the 2020 Democratic ticket, he also hadn't totally ruled it out, either.

It's all trés mysterious, right? Especially when you consider the fact that President Barack Obama's onetime righthand man pretty definitively told CNN back in June that his post-White House creation of his own PAC was not an indication that he would run for president. And in another interview with Snapchat's Good Luck America, which isn't set to be released until Tuesday, Biden said that he's "just not sure" that running for president is the "appropriate thing" for him to do, according to the Associated Press. Biden, who ran unsuccessfully for president in both 1988 and 2008, said that he possibly do so again if "no one steps up."

There's no way to know with 100-percent certainty, but it seems as though Biden is still wrestling internally over whether he wants to go through the grueling campaign process. After all, there are plenty of factors that could give Biden — and his potential voters — pause. The first of those is his age, despite the fact that criticisms about age are only rooted in ageism and not in too many legitimate fears about competency. Biden will turn 78 shortly after Election Day 2020, which would make him the oldest president to ever take office if he were to win. (Biden said this was a "legitimate issue to raise" in his TODAY interview). And then there's the fact that Biden is an establishment political figure, having represented Delaware in the Senate for decades before assuming the vice presidency in 2009, in a political climate that is increasingly hostile toward so-called insiders.

Until he announces for sure one way or another, Biden has us guessing. And there's no doubt that he is taking the temperature of the public's receptiveness to his possible candidacy, too.