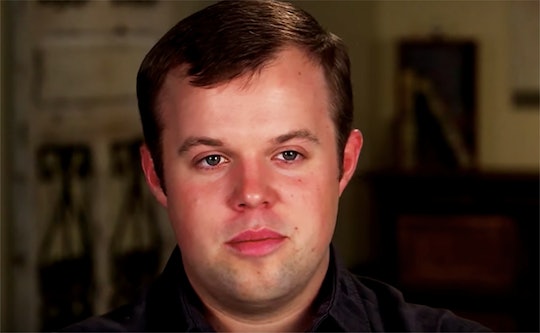 In case you missed the happy news, 28-year-old John-David Duggar released a video on Tuesday announcing his courtship with a 26-year-old woman named Abbie Burnett. Exciting stuff, right? The only snag with this new relationship is the distance — Burnett lives in Oklahoma while Duggar resides in Arkansas. And if the two decide to get hitched down the line (Duggar couples have a habit of settling down soon after courting), it's reasonable to wonder whether John-David Duggar will move to Oklahoma to start his new life with Burnett. Considering Burnett enjoys an established career in her home state, it's not out of the realm of possibilities.

On a June 2017 episode of Counting On, Duggar made a hilarious joke about his bachelorhood and lack of courting prospects. “I’m just holding out. Bachelor ’til the rapture, I guess," Duggar quipped, according to The Inquisitr. And for those who are not familiar with what the rapture is (I admittedly wasn't), it signifies the moment when Christians will be transported to heaven. The whole rapture thing is a bit more complicated than my explanation, but Duggar's joke was funny because believing Christians don't know when this moment will happen. In short, Duggar intended to be a bachelor for a *long* time.

Well, it looks like Duggar won't be a bachelor 'til the rapture any longer because he's officially in a romance with Burnett. "Abbie and I are just so excited, we've known each other for several years, Duggar said in an official statement about the courtship, according to Us Weekly. Awww.

Just like any other relationship out there, however, it's likely Duggar and Burnett will have to make some compromises in the near future. Although Duggar can fly out to Oklahoma anytime he wants thanks to his handy dandy pilot's license, the long-distance thing will likely catch up to them following their potential wedding.

So, will Duggar bid adieu to Arkansas to shack up with Burnett in Oklahoma? Fans probably shouldn't rule this possibility out, and here are the reasons why.

For starters, Burnett is a certified nurse, according to People and as one fan on Reddit verified via the Oklahoma Board of Nursing - Nursing License Verification website. (Yep, Counting On fans are that dedicated.) And if Burnett has an established career in Oklahoma, there's a chance she might ask Duggar to move to her neck of the woods. Duggar, after all, only works part-time as a police officer in his hometown. If Burnett's position is full-time, it would make more sense for Duggar to find a new job in The Buckeye State, right?

Additionally, there are rumors Duggar plans to leave Counting On. Adding fuel to this theory is speculation that Duggar and his dad, Jim Bob Duggar are allegedly feuding. "There's things that Jim Bob does that John doesn't think are right," a source told Hollywood Gossip about the supposed spat. "Some of his real estate transactions, some of the equipment that he buys - a lot of this stuff, Jim Bob doesn't really need, but he thinks he does."

The insider also went on to add, according to The Hollywood Gossip, that Duggar is "old enough now that he can pick and choose what he wants to do," which is 100 percent accurate. If Duggar wants to start a new life in Oklahoma, then so be it.

On the other hand, Duggar is very close to his younger siblings. And now that Duggar's older brother, Josh Duggar, is largely out of the picture, he might feel like it's his responsibility to stay home in Arkansas. You never know.

Either way, it's interesting to consider what the future holds for Duggar and Burnett. But no matter what happens with the move, there's a good chance it will all work out for the best.