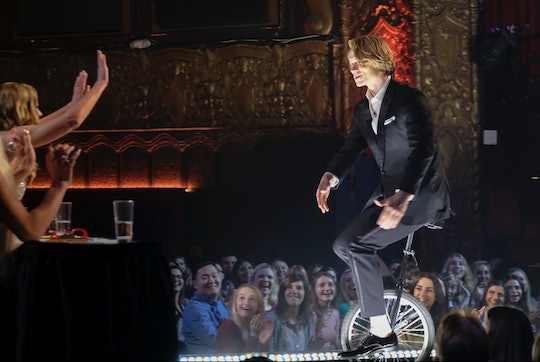 Hannah's season of The Bachelorette may have only just begun, but I'm ready for Paradise — where summer flings burn hot and fast and there are even more tears. It typically begins after The Bachelorette finale, and before the next installment of The Bachelor. With so many interesting men to choose from, I can't help but wonder if one of the most memorable contestants, John Paul Jones, will be on Bachelor in Paradise? Here's what I know.

John Paul Jones has not been confirmed or denied as a Paradise contestant, so if you're a fan, keep those fingers crossed. So far, there hasn't been a lot said about Season 6 of Paradise, aside from theories and fan guesses. That doesn't mean things aren't in the works — they are — it's just that so little has become public at this point, aside from the start date. Set your DVRs for Mon. Jul 29 and prepare for all the love connections and breakups. Filming will likely happen in June and last about a month, then editing for nearly a month before the premiere. Formal announcements about the cast usually begin during The Bachelorette finale with a few names dropped, then the rest in the weeks before the premiere. The buildup of anticipation is the best part, TBH.

With all that happened in Colton's season of The Bachelor, and now through Hannah's season of The Bachelorette, I'm sure it'll be good TV, and whether JPJ is part of the cast or not, that cheesy intro is worth the wait. In the mean time, Variety reported there's one contestant that has been announced, and that's "The Box King," Joe Barsano, who went home on the first night. If it sounds like a familiar story, you're probably thinking of "Grocery Store Joe."

Maybe this isn't the news you're looking for, but I'm sure JPJ will land on his feet, wherever that is. It could be on the white sands of Mexico or it might be back home in Lanham, Maryland.

Wells Adams — resident Paradise bartender and former Bachelorette contestant — has his own theories on who will grace the Paradise bar this season. He told Us Weekly about the weird emotions that happen while filming Bachelor in Paradise, due to it being "super hot, there’s no A.C., there’s crabs everywhere, there’s nothing to do but hang out with everybody," he said. In terms of who may show up, he continued, "I think that Demi [Burnett]will probably come across as pretty normal on Paradise and I think someone like … Kirpa [Sudik], who seemed totally normal, might end up being really entertaining there."

ET Online suggested their own theories about who will appear on Paradise, saying Chris Harrison gave some names to keep an eye on and yep — John Paul Jones is among them. I don't know what that means, exactly, but if Harrison said it, it's as good as true. Leave it to Paradise to take you on the journey of the summer with, or without, JPJ.

As of now, nothing is concrete, so take it all with a grain of salt. Even if JPJ isn't one of the chosen few, Paradise is summer TV watching at its best. But in case it needs to be said: I'm sure there won't be any other contestant who demands you call them by all three names.