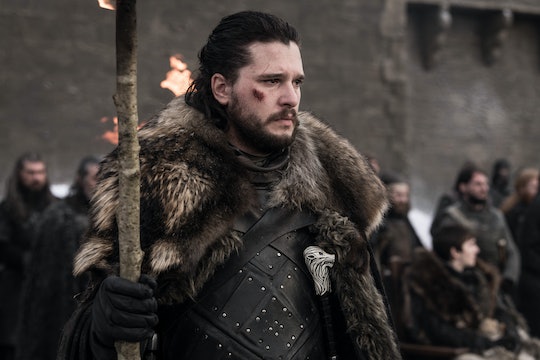 Jon Snow Might Make The Ultimate Sacrifice On 'Game Of Thrones'

The Battle of Winterfell came to a unforeseen conclusion on Game of Thrones when Arya Stark delivered the killing blow that took out the Night King and his entire army. Some fans were surprised that it was Arya instead of Jon, because he made it his life's mission to defeat the undead threat. But what if Jon has a different fate? There's a theory that Jon Snow will become the new Night King, so instead of killing him, Jon's destiny will be to take his place.

This theory has popped up regularly on Game of Thrones forums over the years, which makes its origins difficult to trace. It's gone through some evolutions, too; before Arya cleared the board, many believed that Jon would have to become the Night King in order to overpower him. But now the biggest threat isn't the dead, it's Cersei and her army of hired soldiers. They seem much more difficult to triumph over now that nearly all of Jon and Dany's forces have been wiped out in one fell swoop.

The current reigning iteration of the Jon Becomes The Night King theory, as proposed by several Reddit users, is that Jon will have to transform into the Night King to be able to defeat Cersei.

With the Northern army depleted, victory against Cersei seems increasingly impossible. Sure, Daenerys has dragons, but she's already lost one; there's no guarantee that the other two will be safe, especially if Qyburn is still plotting ways to take them out in battle. Burning down half of King's Landing could get Dany the throne, but it also might turn her people against her. They're all familiar with fire-happy Targaryens and probably don't want a revival of the Mad King Aerys situation.

User joel523 summed up the theory succinctly. They even went so far as to suggest that both Drogon and Rhaegal would be killed by Qyburn sooner rather than later. That leaves Jon and Dany without any options until Bran reveals a possible solution. He knows how the Night King was made, so he can implement that knowledge to make another one. In fact, this user theorized that the King wanted to kill Bran so badly solely because he wanted to prevent the creation of another Night King.

Jon has made it more than clear that he will do whatever it takes to defend the North and save his people. So when Bran offers to make another Night King, he volunteers. Upon becoming the Night King, Jon raises all of the undead corpses again (and as fans saw at the Battle of Winterfell, there were a lot) and rides to King's Landing to do battle with Cersei. Once she's conquered, Dany is free to take over without worrying about Jon's claim on the throne.

The theory diverges then. Joel523 speculated that Arya would be forced to kill her beloved brother-cousin because she's the resident Night Kingslayer on hand. But both HuangZhou and sthomp13 thought it was possible that Jon would merely retreat to the far North like the previous Night King before him. He would ascend to one kind of throne after all, just not in the way anyone expected.

It does kind of sound like solving a problem with another problem (what if Jon goes mad with power and returns centuries later to relive history?), but it does make a strange kind of sense. Jon has always been willing to sacrifice himself and resistant to being crowned. Plus, he's always looked really good in the snow.