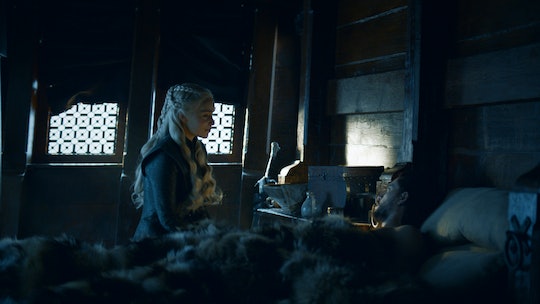 This 'Game Of Thrones' Hookup Could Happen Soon

Every now and then I think about the kind of person Game of Thrones has made me become. I find myself rooting for the guy who pushed a kid out of a window, and qualifying how close people need to be for it to be really incest. Which brings me to the biggest hookup question on everyone's minds: will Jon Snow and Daenerys have sex in the Game of Thrones finale? I wouldn't be so presumptuous as to say when they are going to have sex, but they are definitely going to have sex at some point. It is inevitable. Jon Snow's perpetual bedroom eyes get especially steamy when he's looking at Daenerys. And Daenerys, who never has bedroom eyes, is looking pretty wistfully at the King in the North right now.

There is, of course, one minor hiccup. The fact that Dany and Jon Snow are related. By blood. Season 6 ended with the big reveal that Jon Snow's mother was Lyanna Stark and his dad was Daenerys's big brother Rhaegar Targaryen. That means that Jon is Daenerys's nephew. It is a mark of what this world has done to me that after several seasons of twincest, nephew/aunt incest barely seems to count. Just look at how into each other they are! Come on, this isn't weird, right?

Weird or not, the show is pointing all kinds of fingers in the direction of a Daenerys and Jon hookup. It started with longing glances, and then the showrunners took it up a notch by having major characters draw attention to the longing glances. Davos even said to Jon "I noticed ye staring at her 'good heart.'" Ba dum dum. Then Tyrion told Dany that Jon is in love with her. When she protested he said sarcastically, "I suppose he stares at you longingly because he's hoping for a successful military alliance."

And then, of course, there's the kicker. After Jon heroically sacrificed his life to fend off wight attackers while the rest of the crew escaped on Drogon, he made it back thanks to Uncle Benjen and was brought back to the ship. As he recovered from his injuries Daenerys was there when he woke up, looking down at him lovingly. Meaningful gazes were exchanged. They held hands multiple times. Jon bent the, figurative, knee. Oh yes, this is happening. But when?

At the breakneck pace that this show is going lately, I wouldn't be surprised if they hooked up in the Season 7 finale. But I don't think it's likely. The final episode will focus on the power summit at King's Landing with Cersei, where Jon and Daenerys have to convince Cersei to agree to an armistice because the Night King is real and she'll die otherwise. It's a lot, and Cersei definitely has a trick up her sleeve. Romantic, consensual sex scenes tend to happen in slower moments of the show, usually sometime midseason. Missandei and Greyworm, in the single sex scene in Season 7, got busy in Episode 2. Jon and Ygritte had sex in the cave in Episode 5 of Season 3.

To dive right into this full-on physical relationship in the season finale feels a bit too rushed. If anything, I predict that the two will kiss in the finale in some awkward moment, and probably be interrupted. This will leave everybody eager for more in Season 8, without blowing the game all at once. But then again, I've been wrong before.