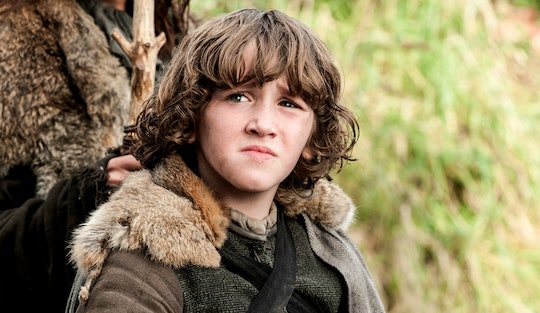 Will Jon Snow Save Rickon On 'Game Of Thrones'? There's A Very Good Chance

Rickon Stark and Osha finally returned to Game of Thrones in the latest episode only to fall right into the hands of Ramsay Bolton. When Rickon and Osha separated from Bran, Hodor, Jojen, and Meera back in Season 3, they went off to Last Hearth, the home of the House of Umber. Greatjon Umber was a bannerman for Ned Stark and Bran believed he would take care of Rickon. Unfortunately for the Starks, Greatjon died and his son, Smalljon, took his place. Smalljon is apparently not so loyal. Although he refused to kneel before Ramsay, he did give him Rickon and Osha as gifts. Smalljon also presented Ramsay with the head of Shaggydog, Rickon's direwolve, to prove that Rickon is in fact a Stark. With Rickon in danger, and Jon Snow free from the Night's Watch, you might be wondering, could Jon Snow save Rickon on Game of Thrones?

As Ramsay prepares to march to Winterfell to face off with Jon Snow, Jon has just left the Night's Watch, declaring his Watch has ended. But if Jon is leaving Castle Black, where is he going? One can only hope he's heading straight for Winterfell. After being forced to stay at Castle Black while his father and brother were killed, Jon can finally do something about all the terrible things that have happened to his family in his absence.

Even though Jon still doesn't know that Rickon and Bran are actually still alive, he may head to Winterfell anyway. Roose Bolton killed his brother but for all Jon knows he's still alive, hanging out at Winterfell. Just as Arya has a list of people she'd like to kill, surely Jon has a few people in mind as well. If Jon makes it to Winterfell and discovers Rickon has been taken, that'd be enough for Jon to take on Ramsay. Plus, if Jon knows about even half the things Ramsay did to Sansa, Jon will really want to kill Ramsay.

Even if Jon doesn't make it all the way to Winterfell, if Ramsay is really planning to try and take Castle Black, which would be really ill-advised on his part, Jon will run into him at some point if he's heading South. Jon and Ramsay are definitely heading on a collision course, and with the Night's Watch and Wildlings in Jon's corner, Ramsay may finally meet his end.