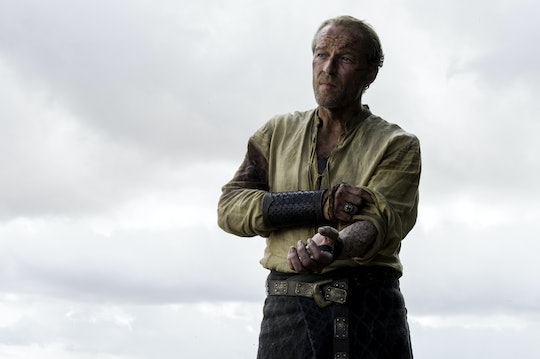 On Sunday night, the moment Game of Thrones fans had been awaiting for over a year finally came to pass, and the epic first episode of Season 7 premiered. And it did not disappoint. Every storyline is setting up for some huge forward momentum, with various characters fending off enemies from all directions, planning an invasion, or figuring out how to make it through a long, dark winter. And then there are the many questions that still need answering — first and foremost, will Jorah find the cure for his greyscale on Game of Thrones?

The last fans saw of Jorah Mormont, he was bidding Daenerys farewell, promising he'd return to her cured and un-stonified so that he could continue to stand behind her, gazing wistfully, for years to come. It looks like that quest hasn't been going great so far, as Jorah's infected arm made a brief but utterly terrifying appearance in this season's first episode, "Dragonstone."

After Jorah rode off in the Season 6 episode "The Door," fans got busy trying to figure out what he could have been up to. The prevailing theory — until last night, that is — was that he might be sticking around Essos for a while. Several websites, including fansite Winteriscoming.net, reminded fans of Quaithe, the mysterious, masked woman with some potentially useful powers Jorah might want to check out. Quaithe last appeared in Season 2, way back when Dany and her crew were still in Qarth.

Well, so much for that idea. And it was a good one, too, because whether or not Quaithe has a bigger role to play in this story is another one of those mysteries that still needs solving. But it looks like that theory isn't going to pan out. "Dragonstone" showed Jorah's greyscale arm emerging from a cell at the Citadel in Oldtown, where Sam has been training and secretly researching how to kill White Walkers.

So many questions. How did Jorah manage to beat Dany to Westeros? Was he captured and brought to the Citadel, or did he go there willingly? Does the long row of cells Sam walked by mean the maesters have been quietly collecting greyscale victims, or are they researching other mysterious diseases as well? Do the maesters hope to find a cure, or are they just making sure that the greyscale doesn't spread? Finally, can we please never be subjected to a "Sam cleans bedpans" montage again?

On May 19, actor Iain Glen told Entertainment Weekly that Ser Jorah's "loss of life is not as big for him as seeking [Daenerys'] redemption," as she may not have entirely forgiven him yet for his brief Season 1 betrayals. "He’s always been willing to sacrifices [sic] his life for her," he added. Could this suggest he won't ever be cured, as his own life isn't his primary focus? Fans sure would like to see it happen, even if he doesn't.

Game of Thrones airs Sundays at 9 p.m. ET on HBO. Stay tuned to see what will become of Jorah, Sam, and all the rest of them.