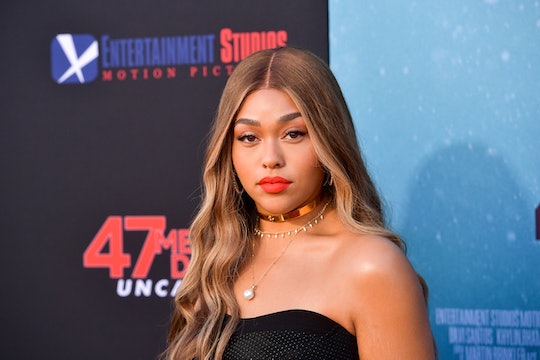 Season 16 of Keeping Up With The Kardashians ended in the aftermath of the now infamous cheating scandal involving Kylie's best friend and Khloé's baby daddy Tristan Thompson. So inquiring minds need to know if Jordyn Woods will be on KUWTK Season 17 and I don't blame them. Luckily, E! recently released a new "supertease" of the season (it's a whole minute long) so I have the tea.

There is no direct mention of Woods in the new KUWTK trailer released Sept. 5. But in August, E! released a shorter teaser featuring Kylie and Khloé clearly talking about Jordyn. "She wanted to write you a handwritten...something," Kylie said. "Should I give her your address?" Fans will have to tune in to Season 17 — premiering Sept. 8 — to hear Khloé's answer. If I had to guess what it is based on other events happening in the upcoming season, I'd say Khloé wants to move as far past the whole ordeal as possible, and that would mean politely declining Woods' request.

Khloé invites Tristan to True's birthday party on one episode, and apparently he doesn't even talk to her. She has to co-parent with Tristan for her daughter's sake. It's always encouraging to see two women respectfully talk out their issues and move on, but sometimes that's just not possible. I can't make the choice for Khloé, but it's totally understandable if moving on for her means she has to forget Jordyn existed.

Khloé seems to be struggling through life in Season 17 with sage at her side. At one point in the trailer above she says she has to "sage my heart so it doesn't get f*cked up by these horrible human beings." I'm not sure who she is referring to but I support you, Khloé, do whatever works for you.

There's also a chance that she accepts Jordyn's request to correspond with her. Khloé is no stranger to moving past adversity and as much as Jordyn has hurt her, last season on KUWTK she seemed at least receptive to the idea that her heartbreak might have been the catalyst to helping two people grow. "I know as much as [Tristan and Jordyn] hurt us, I also know that if this can make them better and if I can be that person then, like I know I'm strong enough to do that. It just sucks it has to be so public, because no one understands how I'm not just a TV show. Like, this is my life and it breaks my soul and it's happened so many times," she confessed in an interview on the show.

Obviously the season is pre-filmed but the drama in everyones lives on KUWTK is ever-evolving. Season 17 will also feature multiple health scares including Kim worrying she has Lupus, OJ Simpson drama coming back into Kris' life, Kim at the White House, and Kourtney threatening to move away.

Part of me wishes peace for every member of the Kardashian clan. But then again, there is no show without drama. Plus at the beginning of the Season 17 trailer mama Kris says, "this family will never fall apart." So, I think they're strong enough to take whatever comes next. And I'm most certainly strong enough to watch.

Keeping Up With The Kardashians airs Sundays at 9 p.m. ET on E!