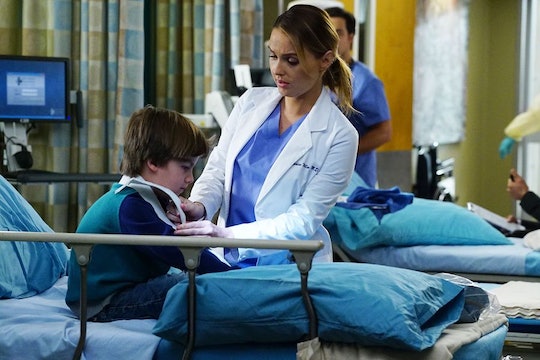 Ever since the Season 12 finale Grey's Anatomy, fans have been wondering about Jo's abusive husband. Though DeLuca got her out of testifying by dropping the charges, many fans believe Jo's husband isn't out of the picture just yet. So will Jo's husband appear on Grey's Anatomy? Grey's executive producer Debbie Allen, who also plays Catherine Avery on the show, thinks there's "a big chance."

Many fans are beginning to speculate that just as Season 12 ended with the reveal that Jo is still married, this season will end with her husband actually showing up. Even more, some people have already started speculating who will be playing the character. Glee's Matthew Morrison revealed on his Instagram story that he is appearing on a show as Dr. Paul Stadler. Though he didn't say what show it was that he'd be on, there's photos of him on the Grey's set, appearing in scenes alongside Justin Chambers, who plays Alex.

TVLine reported last month that the show was looking for a Caucasian actor in his mid 40s to play a new doctor who's "appealing, charismatic, and charming," but also "manipulative" with a "scary dark side." While Morrison wouldn't normally be described as "manipulative" or having a "scary dark side," (he was on a show named Glee, after all), the physical descriptions definitely seem to fit.

What's even more compelling is that the doctor is set to appear at the end of this season and likely return for Season 14, which is basically how long Allen suggested Jo's husband's storyline could go. However, the show has yet to confirm anything, most likely because they want it to be a surprise for viewers.

Based on onset photos, fans believe Alex and Dr. Stadler will attend some medical event, which is most likely where they'll meet. If Dr. Stadler is actually Jo's husband, I'd guess Dr. Stadler purposefully befriends Alex because he somehow knows Alex and Jo were together. (Either that or it's a major coincidence.) Alex, not knowing any better, chats with the guy and they get along fine. Then, by the end of the episode, it's revealed he's going to start working at Grey Sloan Memorial Hospital.

Maybe then Alex and Dr. Stadler arrive at the hospital and Jo sees him and freaks out, thus revealing that he's actually Jo's terrible husband. At least, that's my guess.

Still, this is Grey's we're talking about, which means anything can happen. So don't go thinking you have it all figured out just yet. They may still surprise you.