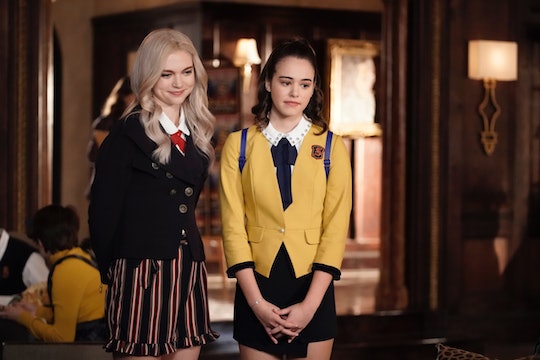 Josie & Lizzie May Finally Have To Face Their Destiny On 'Legacies'

The Salvatore School has had its fair share of monsters and mayhem since the first episode of Legacies aired, but there’s been one quiet danger lurking behind the scenes all season. For their own safety, Alaric’s been keeping Josie and Lizzie’s Gemini Coven fate a secret, but now that Penelope unearthed a book that reveals the truth about The Merge, things may take a deadly turn. So, will Josie and Lizzie merge on Legacies?

In a preview for Episode 15, titled “I’ll Tell You a Story,” it looks like the twins are having a magical confrontation, but it’s not clear if they are merging or just fighting. At the end of Episode 14, before leaving the Salvatore School to move to Europe, Penelope left Josie with a book in which Alaric detailed the Merge. Josie has become increasingly aggressive towards her sister, and if she knows about the Merge, there’s no telling what she might do to Lizzie to gain her powers.

For fans of The Vampire Diaries, Lizzie and Josie’s potential merge has been a long time coming. The twins biological mom, Jo, was a twin of the Gemini Coven, and she died at the hands of her twin brother Kai on her wedding day (she was marrying Alaric) before the babies were born. Magically, the twin fetuses were transferred to Caroline’s (a vampire) belly, and after giving birth to them, she raised Josie and Lizzie as her own with Alaric.

Before she died, Jo revealed that when twins are born into the Gemini Coven, they are destined to merge on their twenty-second birthday. This means the stronger twin will kill the weaker one to siphon their power. Alaric and Caroline have kept this prophecy a secret from the twins, and Caroline has been traveling the world trying to find a solution that would spare them from merging.

If the twins learn of the prophecy, they could end up trying to siphon each other’s power out of sheer paranoia. But I don’t think an actual merge would happen, because that would mean that one twin would die. I can’t see Legacies losing either Josie or Lizzie, at least not yet, considering how grounded they are in the show and the TVD universe.

But I do think their fate will come into question in the season finale, because in an interview with CinemaBlend, showrunner Julie Plec revealed that fans will be left with a major cliffhanger for Alaric. “The end of the season truly brings everything to a head,” said Plec. “We also leave Alaric’s future hanging in the balance. We leave a lot of questions, but it’ll be very clear that we’ve been building to a big reveal and a big moment, and we’re really excited about the cliffhanger.”

What could possibly happen to Alaric? He could come in the middle of the twins as they try to kill each other, or seeing the potential danger, he could try to go help Caroline find a solution for The Merge. Either way, his number one priority has always been protecting his daughters, and I’m sure he’s going to do whatever it takes to save them both.