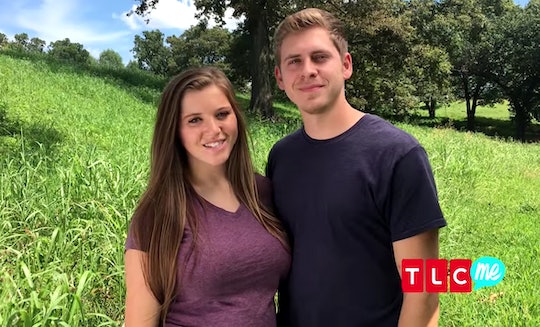 Joy-Anna Duggar has been behind a TV camera for most of her life — first through her family's TLC reality series, 17 Kids & Counting (and then 18 and 19 Kids & Counting, as her parents continued adding to their brood,) and now on Counting On. This newest spin-off focuses on the lives of the now-grown Duggar children. It hones in on milestones like courtships, engagements, marriages, pregnancies, and deliveries. Now, all eyes are on the 9th Duggar child as she's pregnant with her first child. But will Joy-Anna Duggar give birth on Counting On?

In August, People announced that Joy-Anna was expecting her first child with husband Austin Forsyth. The young couple had just tied the knot in May and they were over the moon to be expecting. Joy-Anna told the publication:

We're so happy and thankful to announce that we're expecting a baby! Every child is a precious gift from God. I'm most looking forward to watching Austin as a dad and raising children together with him.

So far, every Duggar child who has procreated has had their births featured on a TLC episode — whether it was back in the day of 19 Kids & Counting, or during the current series, Counting On.

In addition to the Duggar matriarch, Michelle, giving birth multiple times on screen, Anna Duggar — the wife of the eldest Duggar child, Josh — was the first of the siblings to allow cameras to document the majority of her home births, according to Us Weekly. Joy-Anna's two older sisters, Jill and Jessa, have also had their labors and deliveries featured on the family's TLC series.

So it's probably a safe bet that 20-year-old Joy-Anna could very well be following in their footsteps in the coming months. Still, neither Joy-Anna nor Austin have specifically stated their intentions.

Although Jill had originally hoped for an all-natural, home birth, things didn't quite go as planned for her first son, Israel. At 41 weeks pregnant, Jill labored at home for more than 70 hours before heading to the hospital, according to Us Weekly — only for doctors to discover her baby was in a breech position. An emergency C-section was performed on the exhausted mama, and baby Israel finally made his grand entrance. And for Jill's second child, she labored for 40 hours before delivering via C-section at a hospital, according to Us Weekly.

Joy-Anna's sister, Jessa, has also had both of her deliveries featured on Counting On. With her first son, Spurgeon, Jessa labored for 48 hours before having a natural, home birth, according to People. However, shortly after delivering, Jessa was rushed to a hospital for heavy bleeding, the magazine reported. The new mom was ultimately given a blood transfusion, but all ended well; both mom and baby were healthy.

With her second son, Henry, Jessa's delivery went significantly smoother. She gave birth naturally at home with the help of midwife, People reported.

As an avid 19 Kids & Counting fan and now a dedicated Counting On follower, my "expert" prediction is that, yes, the birth of Joy-Anna's first child will be featured on TLC. It makes sense, too, that she would try for a home birth — and that Jill, Jessa and Michelle would all be there as part of her "birth team." So far, though, Joy-Anna hasn't publicly announced her plans.

Whether Joy-Anna opts for a home birth or hospital birth, and whether or not she allows cameras to capture her intimate labor and delivery experience, it's clear she's excited for motherhood. “I have a lot of good memories of my mom teaching us and the quality time we spent together, and I’m really looking forward to doing that with my own children," she told People back in August. "It’s such an amazing thing to be a parent and raise children!"

Although all signs suggest Joy-Anna could follow in her sisters' footsteps, fans will just wait to see how baby Forsyth makes his or her TV debut.