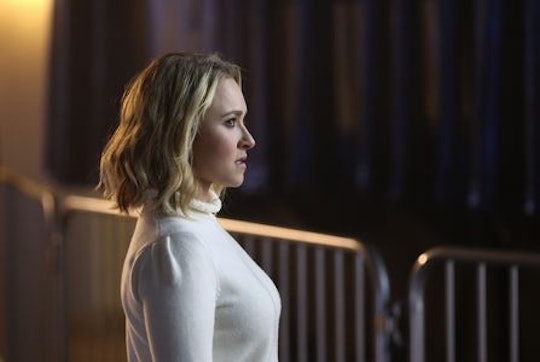 Will Juliette & Avery Get Back Together On 'Nashville'? She Wants Him Back

After hitting rock bottom earlier this season on Nashville, Juliette Barnes is back and slowly, but surely, earning back the trust of everyone she betrayed before she went into treatment. She managed to mend fences with her ex-manager Glenn, and even got him to take her back as a client. And after keeping up her relationship with Cadence while in treatment, Juliette got Avery to let her spend even more time with the baby after she turned down a movie opportunity to focus on healing and getting back on her feet. So will Juliette and Avery get back together on Nashville?

Seeing him rehearse on stage during a sound check with Layla caused more than a twinge of jealousy for Juliette, who was waiting for a meeting with Luke to join his tour. Layla wasn't exactly making things less awkward with her shamelessly handsy duetting style. It seemed innocent enough in context, but of course, we know that she's plotting to seduce Avery in an effort to get back at Juliette for her hand in Jeff Fordham's death. Poor Layla just wants a not-dead, not-gay boyfriend to call her own. Since Avery fits the bill on both of those accounts, and he comes flavored with the built-in taste of sweet revenge, she has her sights set.

In a heart-to-heart with her assistant Emily, Juliette realizes that the only piece missing from the process of getting her life back on track is Avery. She has Cadence back, Glenn is managing her career again, she's gotten herself on tour, and she's substance-free and in therapy. Watching Avery and Layla stage-flirt wears on Juliette's and she totally breaks down. Making it even worse is that Avery was just beginning to trust Juliette again, and she's been reading some of their less anger-fueled and more tender moments together as "sparks." But watching him with Layla sends Juliette into a spiral of uncertainty and self-doubt.

For Avery's part, he seems pretty oblivious to Layla's advances just yet, but that's mostly because he's still processing his divorce from Juliette while navigating how to allow her to be a co-parent again. He's reeling from the breakup and from witnessing Juliette in her lowest moments, but he's also starting to see the good in her peek through. It's unclear whether he's working through his breakup feelings so that he can move on, or whether he's obsessing because he's still hung up on Juliette. Either way, it's pretty obvious that Juliette is only going to be happy with one outcome.