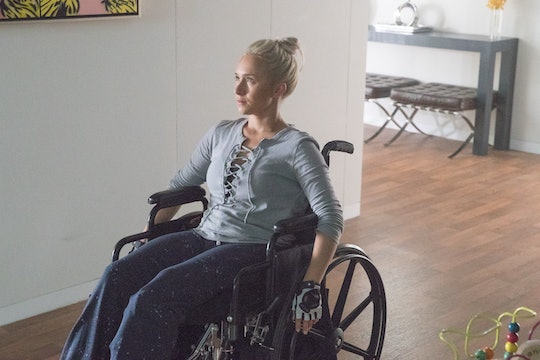 Nashville managed to return Juliette to us alive for the Season 5 premiere, but her plane crash cliffhanger did leave her wheelchair-bound with a possibility that she'll never recover. So will Juliette walk again on Nashville? She did get a flicker of hope in Episode 3. In addition to her usual recovery anxieties, Juliette got the added pile-on in this episode of her manager pressuring her to get back to music. She worries about what she'd look like or how she'd even manage to perform from a wheelchair, telling Avery that performing is all about mini-skirts and stilettos. But this could be a real opportunity for Juliette to actually focus on her voice and her music.

It's clear that she's having a huge personal growth moment working through the trauma of her near-death experience. She definitely feels lost and is desperately trying to reprioritize her life around her new circumstances. And all of that only gets thrown into more chaos when Juliette suddenly feels new sensation in her leg. Writers added some levity to the super emotional scene by revolving her moment of reckoning around being able to feel that Cadence wet her diaper against her leg (har har), but it was unmistakably intense.

Now, Juliette has a whole new struggle to process when she realizes the strength of her survivor's guilt. She shows up at Hallie's house, where she often seems to end up when she doesn't quite know where she's going, and expresses fear that she's regaining feeling in her legs. Hallie asks why fear, and Juliette reveals that she doesn't believe she deserves to be able to walk again after what a terrible person she's been all her life. She's also feeling extremely guilty that she was the only one to survive her plane crash and doesn't believe she deserved that either.

Hallie, who is deeply religious, comes from an compassionate place and tries to convince Juliette to think of her ordeal as a chance to be the person she's always wanted. Needless to say, I hope Juliette still sees her rehab therapist regularly, because it's pretty clear she still has some overwhelming self-doubt to work on. As for whether or not she'll walk again, we do see her attempting physical therapy in promos for upcoming episodes, and her physicians seem uncertain, but optimistic. Juliette's PTSD, shame, and old self-attack patterns will be much bigger obstacles for her to overcome.