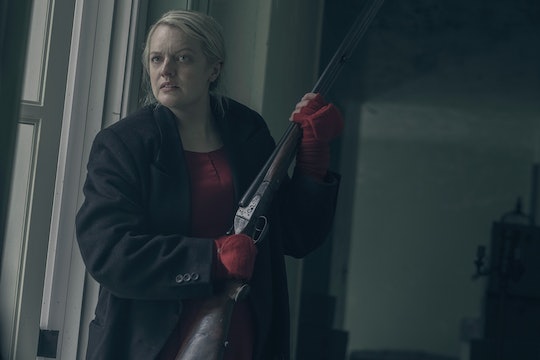 There's Still A Chance June Could Escape On 'The Handmaid's Tale'

June's attempts to get out of Gilead were foiled once again on The Handmaid's Tale in "Holly," though the circumstances were beyond her control. After finding herself stuck in a house far from the rest of town with supplies and a car, she had hope for the first time in a while. But obstacle after obstacle got in her way, and the episode ended with people arriving to take her back to the Waterfords. Will June ever escape to Canada on The Handmaid's Tale, or is she stuck in Gilead for good?

The show has made it clear how difficult running away is by showing numerous failed attempts: Emily was turned away at the airport, Moira almost made it out before being captured and imprisoned at Jezebel's, and June's two previous tries ended violently. But some people have managed to cross the border despite all odds; both Luke and Moira were able to make it over eventually, though they had a difficult time of it. There is always a chance that June could get out, but it won't be easy — and it may not be soon.

Though in many ways the show has moved beyond the Margaret Atwood novel it's based on, the book does hint at June's fate and the show could choose to follow through on those implications.

The novel ended almost exactly like the first season of the show: Offred stepped into a black van with no idea where she was going or who she was going with. It could have been the guardians of Gilead taking her to her doom, or the resistance spiriting her away to safety. It was entirely ambiguous. However, after Offred's story concluded, the novel picked up hundreds of years in the future, with professors dissecting The Handmaid's Tale in an academic setting. It was revealed that Offred managed to record her account of life in Gilead, which might have been evidence that she did escape eventually. As Atwood wrote in the epilogue, from the perspective of Professor Pieixoto:

This item — I hesitate to use the word document — was unearthed on the site of what was once the city of Bangor, in what, at the time prior to the inception of the Gileadean regime, would have been the state of Maine. We know that this city was a prominent way station on what our author refers to as "The Underground Femaleroad," since dubbed by some of our historical wags "The Underground Frailroad."

Offred's story had been recorded on thirty cassettes and packed into a metal locker. Pieixoto believed they could not have been recorded while Offred was a handmaid because the constraints placed on her wouldn't have allowed for it. He also speculated that they might not have been recorded in Maine even though that's where they were found. However, if they were, it would be a sign that Offred had made it further north and was possibly on the way to Canada. Whether or not she ever got there is a mystery.

If the Hulu series chooses to fill in the gaps of the novel's epilogue, then there is a chance that June could escape to Canada. Unfortunately, pinpointing when that would happen is much more difficult; the cast and crew certainly aren't going to drop such a huge spoiler ahead of the season finale. But the book proves that there is still a lot of ground to cover before June's story is done, and her journey could very well lead her out of Gilead sometime in the future. Then June would have a whole new tale to tell.