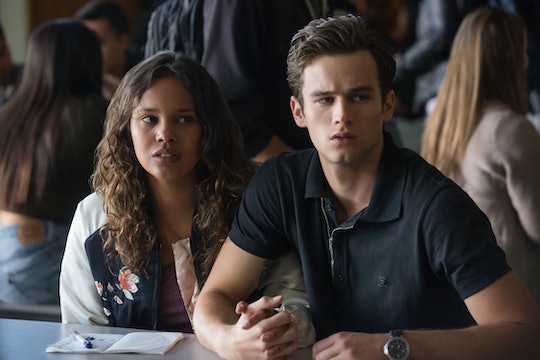 Warning: spoilers for Season 2! Justin and Jessica broke up at the end of the first season of 13 Reasons Why, and their relationship seemed irreparably damaged at that point. Things had transpired between them that were unforgivable and Justin leaving town seemed especially finite. However, his return in Season 2 complicated matters and by the end of the season, their relationship seemed to reignite. But will Justin and Jessica get back together on 13 Reasons Why?

First it's worth examining why their relationship splintered in the first place. As revealed in Hannah's tapes in Season 1, Justin stood by while an unconscious Jessica was raped by his best friend Bryce. Bryce locked him out of the room, but Justin didn't make any attempt to help her, go find help, or alert the authorities. Then he lied to Jessica and told her that they had had sex (which would have also been rape, because she was unconscious and incapable of giving consent), which she continued to believe for months until the tapes exposed the truth.

After their breakup, Justin left town for five months, during which their only contact appeared to be a single postcard he sent that she kept pinned to a board in her room. When he came back, Jessica wanted nothing to do with him, but it was clear she still felt concern over his wellbeing. That push and pull continued throughout Season 2: though the reason they broke up was never far from the characters' minds, Justin and Jessica clearly still have feelings for each other.

In the Season 2 finale, Jessica accepted Alex's invitation to the Spring Fling. They mutually agreed that they were dating and Jessica seemed genuinely happy about reconnecting with him. After struggling to process her assault for months, it looked like Jessica was ready to try being in a romantic relationship again. However, after seeing Justin at the dance and having a heartfelt conversation with him in the locker room, Jessica decided to sleep with him. Whether or not this means they're getting back together is unclear, especially because Jessica didn't end her tentative relationship with Alex before being with Justin.

To be clear: Jessica taking control of her body and her sexuality is important under any circumstances, but especially in the wake of her rape. She should be the one deciding who she sleeps with and when, but that doesn't mean the situation is simple. While it's possible she and Alex had no intention of being exclusive, it's also unlikely; Alex probably won't be thrilled to find out that his new girlfriend slept with her ex while they were in the middle of a date.

It's also impossible to ignore Jessica and Justin's history. Justin obviously feels intense remorse for what he did and has gone to great lengths to own up to it, even corroborating Jessica's account of the rape to the police despite the fact that it ended in his arrest for accessory to felony sexual assault. But does it matter that Justin feels really bad when he was an accessory to an assault? He may have guilt, he may have suffered, but that doesn't erase his actions. He didn't intervene when Jessica was raped and then lied to her about it until he was forced to come clean.

That's not your run-of-the-mill relationship obstacle. It is understandable that Jessica wouldn't be able to just turn off her affection for Justin. Feelings are complicated, and 13 Reasons Why always chooses to explore them at their messiest and most complex. But while Jessica and Justin might get back together in the future, it wouldn't be the best decision for either of them. Jessica may decide to forgive him, which is also her choice, but that doesn't mean it would be healthy or appropriate for them to resume a romantic relationship.