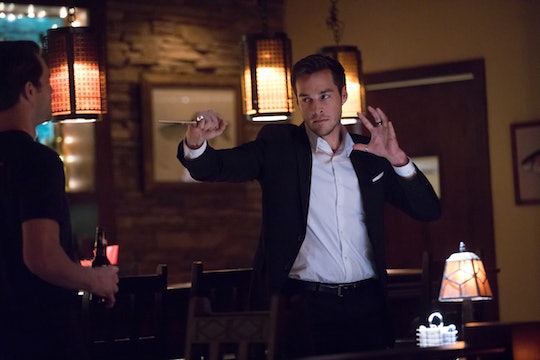 The Cause For Elena's 'TVD' Return Was Revealed

I knew it was coming, but that didn't prevent me from screaming at my television when Kai returned to The Vampire Diaries at the end of Friday night's episode. And from the look of next week's promo, it looks as though Kai will be responsible for Elena's return to The Vampire Diaries. Considering Kai only showed up in the last few moments of the hour, it's hard to say how exactly he was able to accomplish such a feat, given how he's supposed to be, well, dead and all that. But I have a sneaking suspicion it has something to do either with the Maxwell bell, which rang 11 times and allowed Cade to slip through, or Bonnie's psychic pulse, which seems to have caused some sort of magical ramification.

But honestly, does it even really matter how he came back? The important thing is that he is back and I couldn't be more excited. Kai may have been a villain and the reason that Elena is currently taking a seriously long beauty nap, but he was also one of the more interesting Big Bads to come into the picture since the Mikaelsons. He somehow manages to toe the line at being equal parts charming and evil all at the same time.

And now that he's back, he's already looking to team up with some of the old Mystic Falls gang. Instead of being their enemy, he may very well prove to be their most important ally. In the promo, not only does he seem keen on trying to kill Cade, but he also makes the offer to bring Elena back from her peaceful slumber — something I'm sure you can imagine Damon would love to see happen.

So does this mean there's a loophole to bringing Elena back? Does Bonnie not have to necessarily die after all, meaning we won't need to see a major time jump in order for Elena to return? Once again, this series leaves us with just as many questions as answers, but I'm so very excited to see how it will all play out. Elena has missed a lot since she's been away. In fact, Stefan is now human. It's interesting to wonder how she'll take this news, along with all the horrible things both Salvatore brothers have done.

But now that Kai is in the picture, at least we know that, throughout all the intense and serious moments, we'll at least get a few good laughs.