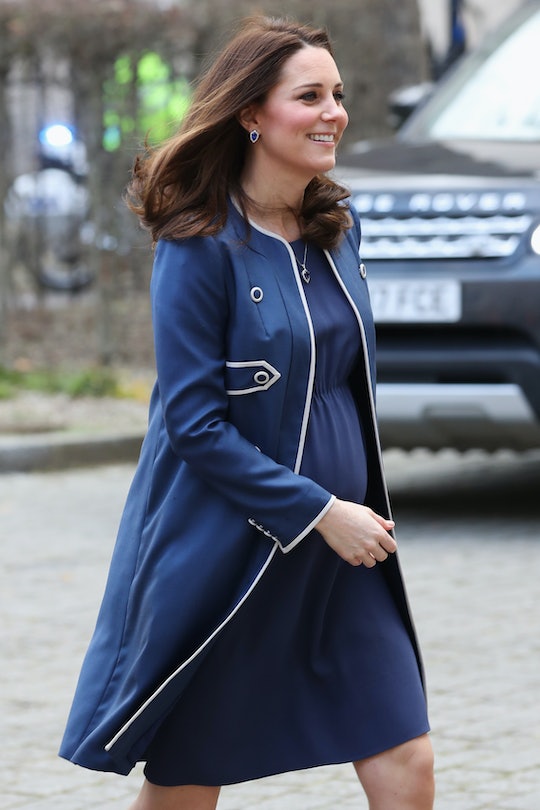 Here's Why Kate Middleton *Could* Use A Midwife To Help Deliver Baby No. 3

As the Duchess of Cambridge, Kate Middleton has a ton of options when it comes to deciding how to deliver her third baby, who's due this April. Given that she's opted for one before, it's possible that Kate Middleton will use a midwife for baby number three, just like she did with Prince George and Princess Charlotte. Although she reunited with her preferred midwife this week, the Palace hasn't confirmed what her birth plan is yet.

On Tuesday, Middleton visited the Royal College of Obstetricians and Gynecologists, where she is the new royal patron, or donor, according to People. In addition to speaking in front of the crowd and accepting her certificate as the new patron, she also ran into Professor Jacqueline Dunkley-Bent, who reportedly helped with the birth of Princess Charlotte and Prince George, according to E! News.

For her first two pregnancies, Middleton had Duckley-Bent, who is the head of Maternity, Children & Young People at NHS England, at her side while giving birth in the Lindo Wing at St. Mary's Hospital in Paddington, which is in west London. It's the same hospital where her husband and her brother-in-law, Prince Harry, were born and costs about £10,000 (roughly $14,000) a night, according to the Daily Mail. A midwife doesn't have to be rustic, obviously.

During her remarks, Middleton embraced Duckley-Bent and said that it was "great to see Jaqui" at the event, which made it seem like they haven't been in touch in some time. So maybe she's going with another midwife this time around, although you can tell just how happy the two were to see each other.

Dunkley-Bent remarked at the event, according to People:

It was a surprise and an absolute pleasure to be reunited with Kate again today. Supporting families at the birth of their baby — including future kings and queens — is hugely rewarding and we’re very grateful to have the Duchess of Cambridge’s support for the nursing profession.

A midwife sees you at your most vulnerable, and possibly raging-sweaty self, so it's definitely a special bond. It makes perfect sense that the two women were so happy to see each other again and catch up, however briefly. Though given the surprised faces, it might not be Dunkley-Bent this time around. However, it does sound like Middleton already has a birth plan ready. According to Hello! Magazine, a British entertainment tabloid, Middleton is reportedly considering having her baby at home this time around.

The outlet reported that sources close to the Royal Family have heard that she is thinking about having the baby at either Kensington Palace in London or at Anmer Hall in Norfolk instead of the pricey London hospital. The source added, "Catherine has said she would love to have her baby at home. She has discussed it with William and he is being very supportive."

If she has her baby at home, she'd probably bring in her own team, and maybe even Jacqui again.

It was a big day for Middleton to show her support for women's health and women health professionals. After the ceremony with the RCOG, she went on to launch the Nurses Now campaign, which is meant to raise awareness about the state of nursing worldwide. She said at the event:

This campaign means a lot to me personally. My great-grandmother and grandmother were both volunteer nurses. They would have learned first-hand from working with the Voluntary Aid Detachment and the Red Cross about the care and compassion that sometimes only nurses can provide.

With this new nursing awareness campaign and the simple act of bringing a midwife onto her birthing teams for her first two children, Middleton has already raised the profile of what nursing and midwifery means. Since she obviously had such a great experience with a midwife the first two times, it's certainly a possibility that she'll use one again for baby number three this spring. Of course, when it comes to the Royal Family, we'll all just have to wait and see what they have planned. But hopefully Dunkley-Bent already knows whether she has to be on call or not.