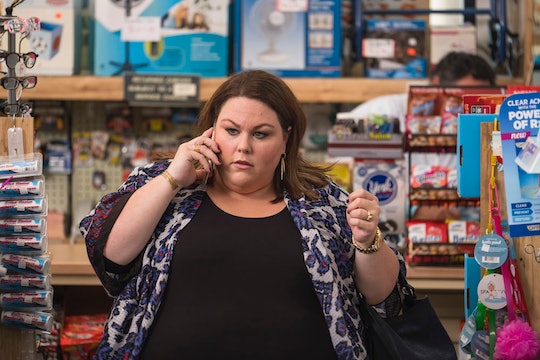 After an entire episode spent leading the audience to believe that Kate was slipping back into bad habits with an obsessive focus on her weight, This Is Us swerved and revealed her anxiety in "Still There" was coming from a very different place: she is actually six weeks pregnant and trying to stay healthy. Kate seems happy about the pregnancy, but she has known about it for a while and hasn't yet broken the news to anyone. So will Kate tell Toby she's pregnant on This Is Us? And why hasn't she told him already?

There's no way Kate will keep the baby a secret indefinitely, simply because she won't be able to; Toby will be bound to notice if a newborn takes up sudden residence in their home in seven months. But it's still very early in the pregnancy. Kate isn't even through her first trimester yet, and she seems to be worried about any potential risks that could adversely affect things. When she spoke with her doctor, she implied that she was nervous about a miscarriage by asking if her fetus was "still there," so it's possible that she wanted to be sure things were progressing positively before she told anyone.

Now that Kate has a clean bill of health and everything appears to be going according to plan, she might make the big announcement to Toby. However, there is also a chance that her concerns aren't just about the health of her and the fetus. She might not know how Toby feels about having children. In Season 1, Episode 15, Toby said he wanted kids "fo' sho'" but didn't exactly elaborate on how many or when he wanted to have them. They didn't know each other for very long before jumping into an engagement that they later realized they may have rushed. Though they're still engaged, they also don't seem to be racing towards the altar. Marriage and kids don't have to have anything to do with each other, but if Toby wanted to put off one then he may also want to put off the other.

It's possible Kate might wait a little bit longer to tell Toby, until a few more months have passed or until she's sussed out exactly how he feels about kids, but the show probably wouldn't push the reveal for too much longer now that the audience knows about it. Usually when big news is dropped at the very end of an episode, it's the kind of cliffhanger that the next episode will resolve. No matter when it happens, talking about kids will definitely be a big conversation for Kate and Toby that determines the course of their relationship in the future. They may have to make changes in how or where they live to accommodate a new member of the family, and finances could be a contributing factor as well. Kate's salary is far from reliable as a singer, though no one on This Is Us ever seems overly concerned about where their money comes from.

Still, all of these obstacles seem very minor at the moment. Kate and Toby are two adults in a loving, committed relationship who are planning on staying together for the foreseeable future. Both have expressed the desire for a family and Kate is happy about the pregnancy; Toby seems to be happy about anything Kate does, so it's hard to imagine he won't be pleased about this too. Even if Toby isn't on board at first (just so the show can wring more drama from the situation), he'll be sure to come around.

Kate is anxious about doing things "right" during her pregnancy, and those worries can make everything seem even more uncertain. But she has a great support system in place and a partner who often tries too hard to support her, so when Kate eventually tells Toby, I'm hoping everything will work out just fine.