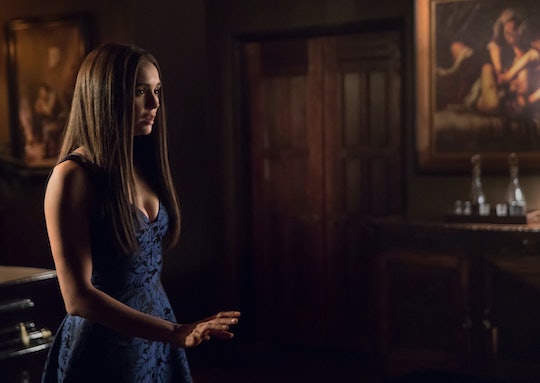 Ever since Nina Dobrev announced she was heading back to Mystic Falls for the series finale, fans have been anxiously awaiting the return of Elena Gilbert on The Vampire Diaries. However, it appears as though the actress could be pulling double duty when the time comes for her grand debut. Katherine is the new head honcho in hell now that Cade has been destroyed, which means fans can expect to see this beloved doppelgänger sooner rather than later. But will Katherine and Elena both return to The Vampire Diaries? Some of you may be starting to wonder if Dobrev's come back will purely be Katherine-focused. But never fear, I highly doubt that will be the case.

For starters, the writers know that we're expecting to see Elena help close out the show. After all, it just wouldn't be the same without catching a glimpse of the girl who set this entire story in motion in the first place. Not only do we need a Delena reunion, but it also just makes sense for her to come back in the end. Don't get me wrong, I love Katherine to death. She's conniving and sarcastic and just downright charming even when she's trying to kill everyone. But if she's coming back, then it's pretty much a given Elena will as well.

Thankfully, though, we don't just have guesswork and assumptions to go on. Julie Plec herself has confirmed during a Q&A on Twitter that not only will we see Katherine, but Delena will indeed come face-to-face once more.

So as you can clearly see, Dobrev will once more be donning multiple roles when she steps back onto our television screens. The only thing that's left up in the air at this point is whether or not we'll see her in this week's second to last episode or if the big reveal will be drawn out until the finale itself. Dobrev is only credited in the March 10 episode "I Was Feeling Epic," though that could just be to throw us off guard.

When it comes to this show, I've learned to expect the unexpected. So if Elena and/or Katherine pop up earlier than expected then great! If not, then we know for sure it's going to be an incredible series finale we won't soon forget. But when it comes to TVD, I wouldn't expect anything less.