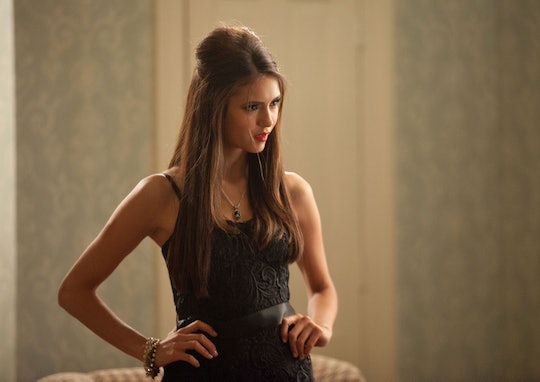 Will Katherine Return To 'The Vampire Diaries'? Nina Dobrev May Come Back In A Unique Way

Ever since it was announced that Season 8 of The Vampire Diaries would be its last, fans of the show have been wondering whether or not Nina Dobrev would return to TVD as Elena Gilbert. And while that question has still been left unanswered, it's seeming more and more possible that Dobrev will come back, but perhaps not in the way fans originally thought. What if she didn't come back as Elena, but rather her character's equally lovable doppelganger, Katherine Pierce? So will Katherine return to The Vampire Diaries? Considering that last week's episode just started exploring the realms of the afterlife (such as hell itself), I think it's not only possible, but highly probable.

No one could ever forget how Katherine, in all of her wicked glory, was sucked up into the darkness shortly after she died and her spirit was unable to enter the Other Side. This led many to assume that she had been taken away to some sort of hell-like realm. So you can imagine the shock viewers experienced when they saw Alaric's assistant, Georgie, experience almost the exact same thing when she was killed by one of the Sirens. That can't be a coincidence, right? Which means it's likely she ended up in the same place as Katherine.

In a way, it's kind of a genius move. Here I am automatically assuming that Julie Plec wants Nina Dobrev back to play Elena, when really it could be Katherine that she has her sights on in the end. That's not to say, of course, that Elena couldn't still show up as well. I mean, if you already have Dobrev on set, why not just have her stick around for some Elena scenes as well? But for now, all signs seem to point to a Katherine return and I honestly couldn't be happier about it.

Don't get me wrong, Elena had some very great attributes as well, but Katherine was by far the more intriguing of the two characters simply because you were never quite sure what she was going to do next. She was a wildcard of sorts and her sarcastic humor was almost as biting as her sharp vampire teeth. Much like Damon, she preferred enjoying life rather than constantly brooding, so it made for a fun and entertaining story arc.

I desperately want to see a Damon and Elena reunion, but if the gang ends up journeying to hell itself and just so happens to run into Katherine, then I say the more the merrier. She may even be the one to help them bring Cade down once and for all. Your move, TVD writers.