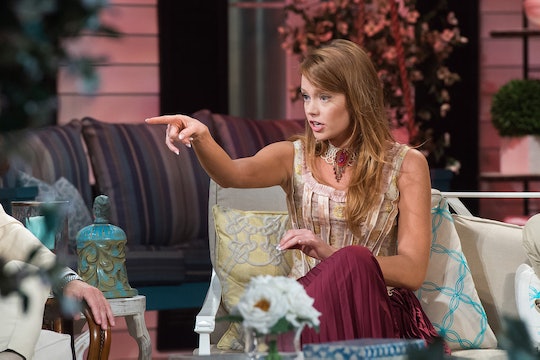 This 'Southern Charm' Duo May Never-Ever-Ever Get Back Together

The series may be called Southern Charm, but not all of its stars are really all that charming some of the time. In fact, they can be just as complicated as any other reality show personality. Which is why fans are starting to wonder if Kathryn Dennis and Thomas Ravenel get back together on Southern Charm this season, despite everything they've been through. This new season opened by showing that Thomas had full custody of their two children, since Kathryn went away to rehab in California. The season premiere showed a pretty humble return of the southern belle, and it looks like she's trying to figure out what friendships and relationships to get involved with again.

But change is hard and it seems like love might just not be in the stars again for Kathryn and Thomas, given everything they've been through. Thomas, 54, has been pretty clear that he's searching for love this year, and he's not looking at his ex. "I’m taking a hard look at Landon,” he told People, referencing his other co-star. He also made it pretty clear that his choice to break things off from Kathryn was a done deal. He said that it "was a children-first decision" and added: "I might have hung in there. We had some good times, but there was also so much negativity that was very unhealthy for the children. We had to put the children first."

It also takes two to tango and Kathryn doesn't seem to be waiting around for Thomas either. She said of the rumored Thomas-Landon match up, "[they're] both so ridiculous that I think that perhaps they kind of deserve each other.”

Additionally, Ravenel doesn't seem to think that Kathryn is The One. Not only did he say that the decision to break up was about children first, he's also called Kathryn a "crazy redhead" in the second episode of this season and accused her of still using drugs. He told reporters:

I want a woman who feels privileged to be with me because they know me and they know my character and they know that I tell the truth and I’m honest. In this quest, given my checkered past, I think it’s going to take a special woman who’s going to be able to accept that. And I think I deserve no less.

So Kathryn doesn't seem to be the woman that it seems the feeling is mutual. Whatever love that may have existed between the two of them appears to have run its course.