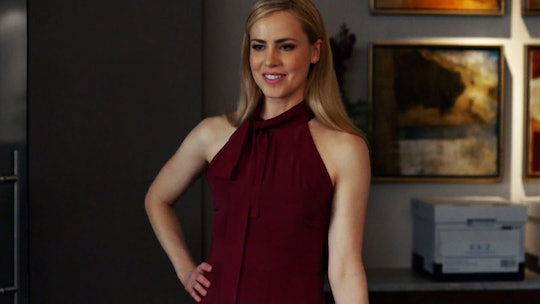 Katrina's Career May Take A Turn On 'Suits'

As one door closes another one opens on Suits. At the end of the midseason finale of Suits, Jessica (Gina Torres) revealed that she was leaving the firm and corporate law all together. Now in the season premiere both Louis and Harvey attempted to find their footing in this new world, without Jessica in it. While Harvey struggled to focus, Louis decided to take the initiative by bringing in a new class of associates. Except they're not all that new. In the midseason premiere, fans saw the return of Louis' former associate, Katrina Bennett, but will Katrina really return to Pearson Spector Litt on Suits? It looks like she's back for good.

After Rachel's father, Robert Zane, paid Louis and Harvey a visit to ask them if they'd like to merge the two law firms, Louis took the whole conversation as an attack on his abilities to be managing partner, because of course he did. In retaliation, he decided to poach 10 of Robert's associates starting with Katrina. The last time fans saw Katrina was back in Season 4 when Jessica fired her after she tried to steal a client for Louis who had resigned from PSL. After Louis went back to the firm he couldn't bring Katrina with him so Rachel asked her dad to get her a job at his firm, which is where Louis finds her in the premiere.

After promising her she'll become senior partner faster than sounds reasonable, Katrina agreed to help him get the other Zane associates to work at PSL. However, when Louis went too far and tried to steal Robert's biggest client, Katrina told him if he went through with it she couldn't go back to work with him because Robert actually was a decent person and waived the associates non-compete clause so they could leave his firm.

Thankfully, Louis saw the error of his ways and Katrina, along with the other associates, are headed to PSL. It'll be interesting to see how Katrina steps back into the swing of things now that so much has changed. Will Gretchen like Katrina? Are Katrina and Rachel going to be besties now? Also, can Mike just go back to working there so he and Katrina can be work buds again?

Fans will just have to wait and see what Katrina 2.0 means for PSL and the show in the upcoming episodes.