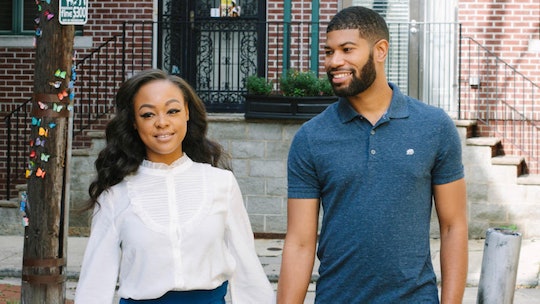 A major decision awaits all four couples on Lifetime's Married At First Sight as Season 8 draws to a close. Even after watching each pair grow closer over the weeks, those final choices are difficult to predict. Keith and Kristine seem to really like each other, but this exclusive clip reveals that there might still be some trouble in paradise. There's a chance Keith and Kristine will get divorced on MAFS, though their shippers shouldn't worry too much. There's a chance they'll stay together, too.

The clip opens with Keith speaking directly to camera in what appears to be a self-filmed confession. It's decision day and Keith has some feelings to work through about that. He remarks on the intrinsic oddness of the situation: after seven weeks of sleeping beside a stranger, they now have to decide if that stranger is someone they want to stay with. "I could either be going back home with my grandmom, or I could be, you know, back with my wife," he muses.

Keith prepares for decision day while the clip segues into a montage of key moments from his relationship with Kristine. Viewers get to see their wedding once again, with their first kiss and toast to new beginnings. There's a quick glimpse at some of their more romantic dates. And Keith explains why he likes Kristine so much, which definitely makes it seem like he'll be voting to stay together.

"You know, there's a lot of things I like about Kristine," Keith says as he readies himself to meet her for their joint decision. "She's attentive, she's a nurturer, she's kind, she's smart. She's just a great person all around." His warm words mirror one of their previous dates, which the clip flashes back to: over chocolates and champagne, Keith once told Kristine that she was an amazing person who he wanted to keep forever. In the present, Keith concludes by saying he's confident in his decision and hopes that Kristine feels the same.

Keith may want to stay married, but what about Kristine? That's where doubt enters the equation. She climbs into her own car to go meet him and then shares how she's feeling. "It's a big decision ahead," she says. "There's a lot that I truly enjoy about Keith, you know, a lot that I appreciate. And then there's a lot that also makes me want to take a step back." The clip cuts off before the audience can hear any more from Kristine. She doesn't get to explain what exactly is making her want to step back, but the fact that she has reservations at all may be worrying.

However, there's no need to be too negative ahead of the Apr. 2 finale, "The End or the Beginning." Kristine may have worries, but she also likes Keith a lot and he likes her. If there's nothing huge holding her back, then she might decide to stay married to him and work through any minor issues as a couple. Divorce is always a possibility when you marry a complete stranger, but these two have only grown closer over the weeks. A happy ending could still be in the cards.