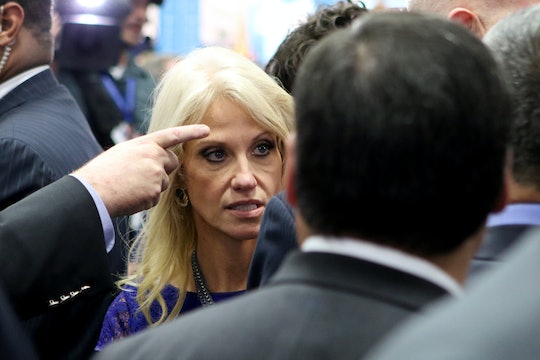 After the second presidential debate Sunday night, Trump campaign manager Kellyanne Conway sat down with MSNBC's Chris Matthews, who asked her if she would stick with Trump's campaign until the bitter end. She avoided the question (in true Trump style, of course) before finally answering "I'm with the campaign until the bitter end, unless... ." Matthews followed up with "Unless?" And she said, "Unless... I mean I'm sitting here as his campaign manager. It was weird. So will Kellyanne Conway quit Trump's campaign? It doesn't look like she will just from that snippet, but she certainly doesn't seem super committed. Unless what? It was such a cliffhanger!

Conway has been a bit of a mystery recently. After the release of what's being called the "Trump tape" on Friday, Conway went silent on Twitter. Before the day of the debate, Conway hadn't tweeted since Friday.

Prior to the debate, Conway responded to Saturday Night Live's spoof, which included her portrayed by Kate McKinnon, according to Entertainment Weekly:

[Kate McKinnon] has me down! We got a good laugh in our crazy house. @jaketapper ‘We good?’

The skit showed McKinnon as Conway trying to enjoy her day off. But she can't relax because she's constantly interrupted by Trump making yet another insensitive or terrible comment. By the end of the day, she gives up on trying to maintain composure and says:

What do you want me to say? Yes, he said that. He’s crazy. He’s the worst person I’ve ever known.

Conway definitely wasn't playing nice during the debate Sunday. She tweeted a number of abrasive comments aimed at Hillary Clinton:

Conway seemed to remain loyal to Trump and her cause despite discussion of the tape, which does feature Trump talking about grabbing "the p*ssy" of a woman and doing "whatever" he wants with her. (Notable since Conway seemed to be determined to focus on women who have accused Bill Clinton of sexual assault.)

So the interview she gave to Matthews on MSNBC was confusing. She will stay with the Trump campaign, "unless"? Unless he says something more outrageous? Unless he still refuses to acknowledge that he contributed to the same rape culture that allows Hillary Clinton to be blamed for her husband's alleged actions? Unless he gets naked and runs around New York City? Who knows. But Conway's answer seemed to make clear that maybe she was fazed by the tape. Or maybe she didn't think Trump's performance was as strong. Or maybe her loyalty isn't wavering, and she's instead just adopted Trump's very confusing style of speaking.