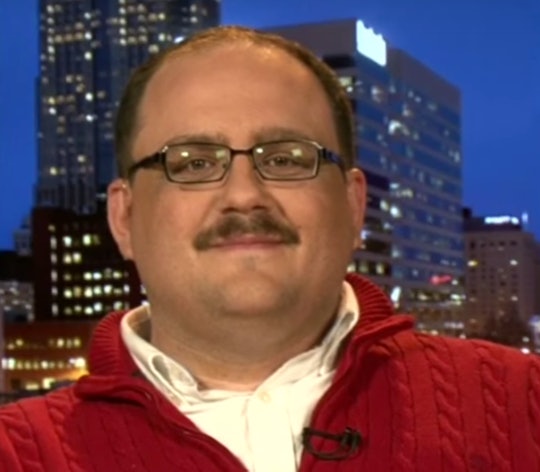 Will Ken Bone Be Back For The Final Presidential Debate? He'll Definitely Be Watching

Just days ago, Americans needed no additional incentive to tune in to the third presidential debate; the thought of Democratic nominee Hillary Clinton and Republican nominee Donald Trump going head-to-head for the final time was compelling enough. But after watching the second debate on Sunday, the last debate just won't feel complete without one man in particular seated in the audience. Will Ken Bone be back for the final presidential debate? Unfortunately, there's no indication that he'll be making the trip to Las Vegas. But even if he's not there in person, he's using his newfound fame to keep his political voice alive.

Toward the end of the second presidential debate, a significant percentage of viewers were at the end of their rope; one spectacular undecided voter tied the knot that helped America hang on. The town hall format meant that members of the onstage audience got to ask questions. Perhaps the most important moment of the night came when moderator Anderson Cooper threw to Bone, who instantly stood out for his now universally-beloved red sweater. Bone's debate question was a challenging one, according to CNN:

What steps will your energy policy take to meet our energy needs while at the same time remaining environmentally friendly and minimizing job layoffs?

Just like that, the internet fell in love: with Bone's name, his look, and his infusion of common sense into a wildly unpredictable 90 minutes. Unfortunately, it doesn't look as though the country will benefit from Bone's incisiveness at the third debate: Bone got a seat at the second debate because he was determined by Gallup to be an undecided voter in the St. Louis area, The New York Times reported. Even if he won't be in the audience for Clinton and Trump's last exchange, he said that he will be watching. And though he works as an operator for a coal plant by day, he's leveraging his growing popularity on social media to encourage fans to care as much about the political process as he does.

Bone tweets to his more than 168,000 followers, asking them to register to vote, discuss the issues they care about, and go to the polls in November. If voters have trouble deciding which candidate to support, Bone gets it. In an interview with the Washington Post, Bone said Trump's economic policies are more likely to protect his own fossil fuel job but that Clinton's policies may be best for the country as a whole:

And so this election cycle personally, to me, is about my interests versus the common good, and it's a tough one. And I really haven't made a final decision yet.

No matter where fans stand, Bone's message is clear: vote, even if it's difficult. And for anyone taking Bone's lead, the final presidential debate airing at 9 p.m. Eastern Time on Oct. 19 and broadcasting from the University of Nevada, Las Vegas will be must-see television. Who knows? Maybe Bone will give a gift to the nation by live-tweeting the debate.