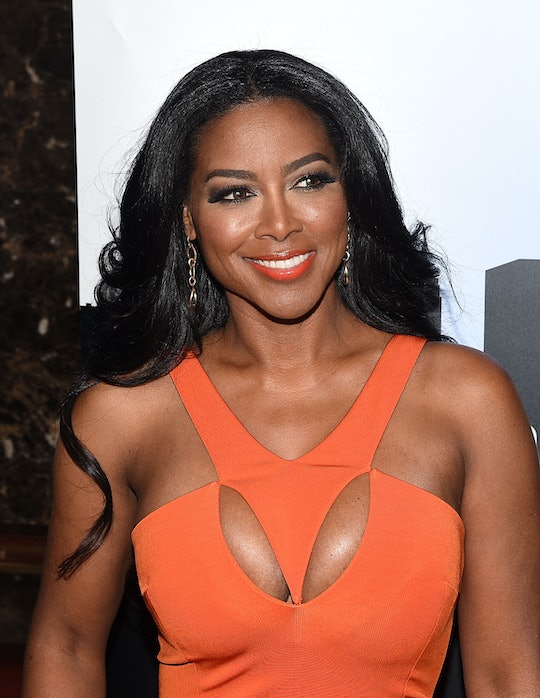 'RHOA' May Be Putting A Strain On Kenya Moore's Marriage

Kenya Moore returned for Real Housewives of Atlanta Season 10 with a big update: she got surprise-married to an ex-Wall Street banker turned restaurateur named Marc Daly. It was such a surprise, in fact, that not even Bravo cameras were permitted at the nuptials (although People was allowed to profile it). So will Kenya Moore's husband be on RHOA? While there are no confirmed reports one way or another, rumor has it that he won't and that it was a point of contention for Kenya's contract renewal.

Her elopement has caused some controversy amongst her castmates because no one had met her husband at the time of filming, and they were only together for six months before getting married. And her honeymoon phase lasted for all of about one episode this season. By Episode 2, she was already crying into her producer's arms off-camera about how overwhelming the drama surrounding her marriage was. Her mic stayed on, though, and her breakdown was captured for the show. She can be heard saying through tears:

This is really just f*cking with him. He can’t even sleep, he’s not eating. He’s got ex-girlfriends sending him things about me from 25 years ago [about] some famous guy I dated. Like, what does it have to do with now? They don’t know me and everybody said he fought his mother and everybody for me. This pressure is too much. It’s too much stuff going on. I don’t wanna get divorced.

Part of the struggle is also that Kenya's marriage was long-distance, at least at the time she was shooting. She was still living in Moore Manor while her husband Marc was living in New York, running a Brooklyn restaurant called SoCo BK. It's where the couple met during the summer of 2016, thanks to Roblé Ali, of Chef Roblé and Co. Although during some confessional segments, Kenya appears to make the best of it, saying that they're figuring out how to make it work as they go, she can also be seen wistfully staring at her wedding dress and crying to friends over the phone about how lonely she is. They've since moved into their own home together, which seems like kind of a bummer given all the work Kenya put into her dream house.

It looks like a tough spot to be in, but even still, there are unconfirmed reports that Marc refused to sign an appearance release to be on the show, even when producers offered him compensation. He seems pretty adamant about staying off-camera, which makes sense given the track record of Real Housewives franchise divorces. Although the simple act of being a Real Housewife doesn't cause marriages to fail, reality TV has an unavoidable way of bringing underlying issues to light. If a couple hasn't dealt with them privately, honestly, and with good emotional support, they're guaranteed to come out in the bright spotlight with the added bonus of public scrutiny.

Given all of that, it makes sense that Marc would want to keep his fledgling relationship safe off-camera. However, it's only made gossip worse, as people begin to accuse Kenya of being in a fake marriage.

It seems like he's struggling with the way rumors can swirl around a Bravo-lebrity, and Kenya appears fearful that it could drive him off. Meanwhile, some sources say that Marc's refusal to be on the show put Kenya's contract this season in jeopardy, since she reportedly tried to leverage her relationship to get a better salary. It's a mess, but according to her Instagram, the couple was just recently hanging out together in New York, so they seem to have moved past whatever hump was plaguing them at the beginning of the season. But as for seeing Marc on the show, don't count on it.