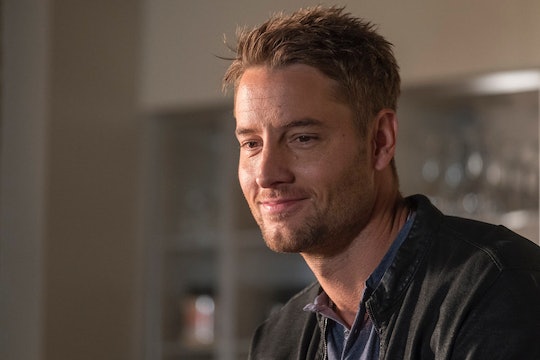 Kevin’s big storyline on This Is Us Season 3 has been his search to get to know more about Jack's past. As it turns out, he might have gone halfway around the world only to find what he was actually looking for near his hometown. He might not know that yet, but you have to assume that Kevin will find Nicky on This Is Us after that fall finale. In the last few minutes of the episode, an older man who was very likely Nicky came home to his Pennsylvania trailer and to mail addressed to Nicholas Pearson. Now that viewers know he’s still alive out there, it probably won't be long before Kevin follows a trail to his thought-to-be-dead uncle.

Justin Hartley, who plays Kevin on This Is Us, told Entertainment Tonight that their meeting is inevitable, only it's unclear when exactly it will happen. Or how, really. Hartley revealed that Kevin will meet Nicky "really, really, really soon." Hopefully that means viewers won't have to wait much longer after the show returns on Jan. 15. "Well, we don't even know if he's gonna meet him, right? He's gonna. I mean, that's the thing, who's keeping that secret, right?" Hartley added. "We all know that's happening."

Now that it’s all but certain that Kevin and Nicky will meet, it makes you wonder how it will happen and what will actually bring Kevin back to Pennsylvania after trying to find out information about Jack in Vietnam.

Hartley did promise "a huge story" behind the Big Three trying to grapple with the idea that Jack kept something from all of them and took the secret to his grave. If that is the case and Jack knew about his brother being alive for years before his own death, there’s going to be a lot of questions about why he kept it from everyone, including Rebecca. We're also likely to see flashbacks of how he struggled going through life with memories of Vietnam and the burden of keeping that secret alone.

Milo Ventimiglia, who plays Jack, pointed out to In Style that something might have happened between Jack and Nicky for Jack to keep him out of his life after Vietnam. That is, if Jack did know his little brother was still alive. "Considering that Nicky is still alive but he wasn’t involved in Jack’s life beyond the war… it’s going to be interesting to see what the audience think of what happened in Vietnam and moving forward in Jack’s life," he said.

As Kevin geared up to leave the village in Vietnam at the end of the fall finale, he was told that his uncle didn't die in the war. This might lead Kevin back to the U.S. to find out what happened to his uncle after the war ended or if any of Jack’s friends know about Nicky. It might be a long shot, but Nicky and Kevin’s meeting is inevitable at this point.

I don't expect it to happen anytime soon, though. It definitely feels more like a season finale scene to set things up for Season 4. In a perfect world, the This Is Us writers would give fans a long awaited reunion between Nicky and Jack’s family, but it likely won't happen until much later in the season. Despite what could be a longer wait than some viewers might want, something tells me it will all be worth it in the end. Just make sure you're well stocked on Kleenex for the This Is Us-sized family reunion.