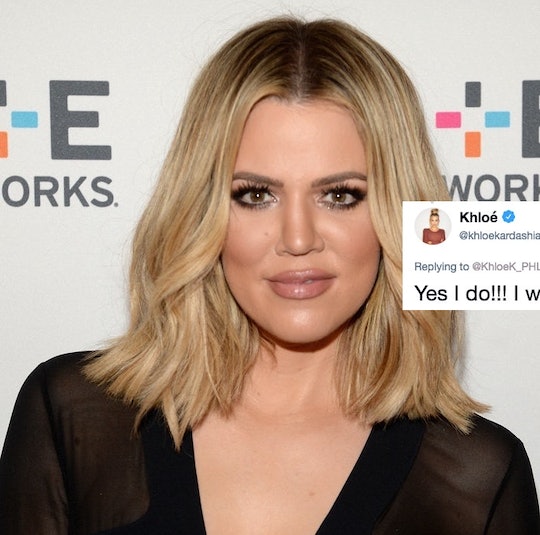 Khloé Kardashian is incredibly candid with her fans when it comes to parenting 3-month-old baby True. Case in point: Kardashian took to Twitter on Friday to answer a fan's question about True's potential baptism plans. Yep, girl is an open book these days. But transparency aside, will Khloé Kardashian christen True? As it turns out, Kardashian is already planning True's christening.

If you know anything about Kardashian, you probably are aware that she's a devout Christian. In fact, Kardashian penned an entire article on the subject for Lena Dunham's Lenny Letter, titled "My Relationship With Spirituality." In the May 2016 piece, Kardashian described her religious upbringing and how her relationship with God was shaped by her late father, Robert Kardashian.

"My father was Christian Armenian, and I've always gone to Presbyterian or Catholic schools ... We went to church every Sunday, religiously," Kardashian penned, according to Lenny Letter. "When we started getting older, my dad stopped going to church, but he still read the Bible every single day. Sundays then became about his bringing church and religion into our home. He would play gospel music — it had so much soul, and he loved that."

As for where Kardashian stands today on religion, she's just as devoted as she ever was. Want proof? Look no further than Kardashian's tweet confirming True's christening plans. When a fan asked if True will have a christening, Kardashian replied in a tweet: "Yes I do!!! I want to do it at Tristan’s moms [sic] church."

Aww. It's sweet that Kardashian plans to honor Tristan Thompson's mom, Andrea Thompson, in such a special way.

Considering Thompson and Khloé are both close with their moms, some fans might be wondering why Kris Jenner isn't at the forefront of True's christening. The likely answer here is Jenner doesn't attend church consistently — the matriarch prefers to practice religion in the comfort of her own home.

“We don’t share it much, but we’re really religious. "We start our day with a group chat with a Bible verse from my mom, and everyone chimes in on the meaning of it," Kim Kardashian said about the family's preferred method of worship, according to Vogue. "We are very Christian—and our work ethic and our discipline comes from so many years at Catholic school.”

So, since the Kardashians typically don't attend church, it makes a lot of sense Kardashian chose Andrea Thompson's place of worship to christen True.

As for when True will be christened, that remains to be seen. What is clear, however, is that fans are excited for this special moment.

"Wow can't wait for that.. yeeeyyy," one person wrote, according to Twitter.

Another person chimed in: "It's such a blessing!"

"It's very important," another person added.

And it sounds like fans won't be disappointed when it comes to the actual event. Sources supposedly close to Kardashian revealed to The Sun that she might go all out for True's special day. "Khloe is relieved that Kim and Tristan are speaking again – and she has made it her mission to organize the sweetest Baptism ever for little True," the insider claimed, according to The Sun. "After all they’ve been through as a family, it’s time for a celebration. Khloe is already planning on an angelic white theme for the Baptism. She is so happy they are on good terms again."

Well, I have no doubt Kardashian will plan a beautiful day for True's christening. Kardashian has a deep relationship with Christianity, after all, and I bet she can't wait to share her faith with True.