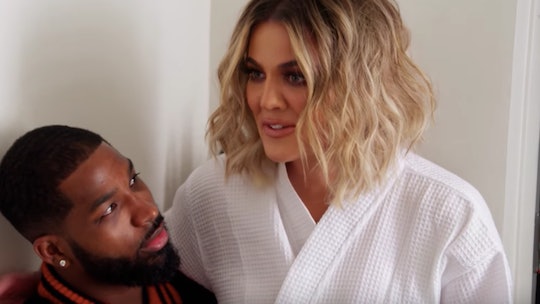 Khloé Kardashian's baby news has fans drooling over her every move. Today, Kardashian fans could put down their imaginary binoculars because the reality star and mogul was on full display, appearing as the guest on The Ellen DeGeneres Show. And Kardashian answered one of the questions that's on everyone's mind, which is, "Will Khloe Kardashian marry Tristan Thompson?" Don't bust out the rice just yet, because as she told DeGeneres, she isn't in a hurry to tie the knot.

Sitting down with DeGeneres, Kardashian opened up about her relationship with boyfriend Tristan Thompson and dished a bit about her famous sisters. In addition to all that, she nearly got tricked into outing her sister Kylie Jenner's unconfirmed pregnancy rumors by a witty Ellen DeGeneres. One major thing that Kardashian did reveal was whether she's ready to walk down the aisle with Thompson.

In the below clip, when DeGeneres asked Kardashian if she plans to get married, Kardashian admitted, "I hope so, but I'm not in a rush for any of that. As you know, I've rushed quite a few things before ... So right now, I'm so loving the place that I am in my life and I'm just very happy with how things are going."

When it comes to Kardashian saying she has rushed into things in the past, she is referring to her rocky marriage with ex-husband Lamar Odom. The two were married from September 2009 to October 2016 and they tied the knot just one month after first meeting. Kardashian and Odom met at a friend's party, according to Us Weekly, and Kardashian's family showed their concerns about the marriage on an episode of Keeping Up With the Kardashians when the ex-couple first got engaged. Unfortunately, drugs and infidelity rocked Kardashian's marriage to Odom and the two ended up divorced, according to The Washington Post.

Kardashian and Thompson started dating in August 2016, according to Us Weekly, and, Kardashian introduced her relationship to her fans publicly on this past season of KUWTK. On the show, she seemed to predict the future, as Kardashian said Thompson, "wants to have, like, five or six kids with me, and that’s lovely."

Thompson and Kardashian have clearly gotten their wish. With a baby on the way, Kardashian said on The Ellen Show that she does indulge in cravings and that her beau Thompson has been very attentive. She even called him "a dream" to DeGeneres. Kardashian also said that if they have a boy, the couple will name their son after Thompson. She revealed to DeGeneres that, "If it’s a boy I’ll go with Junior — Tristan Jr. Then for a girl, I don’t know where to begin." Kardashian said that she wants their child's name to start with a "K" or a "T", after mom and dad.

Kardashian has revealed that she will announce the sex of her baby on an episode of Keeping Up With the Kardashians, though People has already reported the couple is having a boy. So, it sounds like the name Tristan Jr. could be the way to go. Kardashian confirmed that this reveal will indeed happen on KUWTK in a Twitter response to a fan.

Kardashian and Thompson first confirmed their pregnancy news on Dec. 20, 2017 in a touching Instagram post. In the announcement, Kardashian wrote:

So, even though Kardashian says she isn't running down the aisle with Thompson right now, it seems like there could be wedding bells in the future. Only time will tell, but hopefully Koko will keep her fans in the loop.