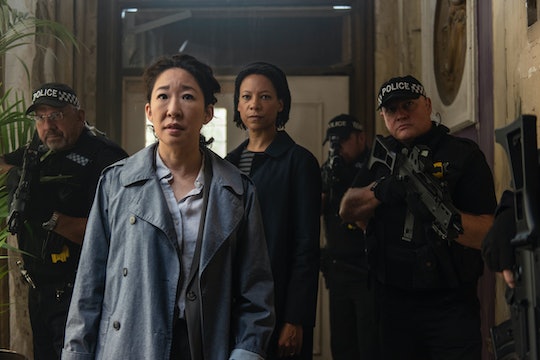 Here's Where You Can Stream 'Killing Eve'

For fans of Killing Eve, the Apr. 7 Season 2 premiere was a long time coming. The series is currently airing on BBC America and AMC, and it’s all anyone is talking about. If you’re a Netflix subscriber, and haven’t watched the show yet, you’re probably wondering if Killing Eve will be on Netflix, so you can catch up and join in on the buzz.

Well, there’s good news and bad news. The bad news is that Season 1 of Killing Eve is not on Netflix, but the good news is that the entire season is available to stream on Hulu with a subscription. You can also find the first season, as well as new episodes of Season 2, on iTunes, Youtube, and Amazon Prime.

If you haven’t started watching Killing Eve, there are plenty of reasons why you should start. The series is an espionage thriller that follows the lives of MI5 officer Eve Polastri (Sandra Oh) and the dangerous assassin, Villanelle (Jodie Comer). While Polastri is assigned to track her down, Villanelle tries not to get caught, and the two end up forming a cat-and-mouse relationship that turns into a mutual obsession. Their unusual connection leads viewers through an exciting series of twists and turns that you wouldn’t typically expect from a spy story.

With its intense story and incredible performances, Killing Eve has audiences hooked, but it’s also garnered tremendous critical acclaim. The series received multiple Golden Globe, Critics’ Choice and Primetime Emmy nominations. And for her amazing lead performance, Sandra Oh picked up a Golden Globe, Screen Actors Guild Award, and Critics’ Choice Award for Best Actress. Her work on the show also led her to become the first Asian actress to get an Emmy nomination for Best Actress in a Drama.

But critics and fans aren’t the only ones lauding Killing Eve. Believe it or not, despite not having the show on their own catalog, Netflix actually sent out a tweet admiring the show, and encouraging viewers to watch it on their rival Hulu’s platform. “Every single one of you reading this right now needs to make time in your life to watch Killing Eve,” tweeted Netflix. “It's a true masterclass in writing, directing, and acting. Oh goodness ... the acting! What Sandra Oh and Jodie Comer do in this show is NEXT. LEVEL. PERFECTION. Watch it.”

When fans asked Netflix where they could find the show — considering it wasn’t available on their platform — the streamer tweeted “Try Hulu,” prompting Hulu to respond with appreciation, tweeting, “What they said.”

So, there you have it, straight from the horse’s mouth. Killing Eve isn’t available on Netflix, and there’s no reason to expect that it ever will be. But you can catch the entire first season on Hulu right now with a subscription, or look to platforms like Amazon Prime or iTunes to purchase episodes. Either way, now may be the perfect time to jump in on the thrilling action everyone is buzzing about.