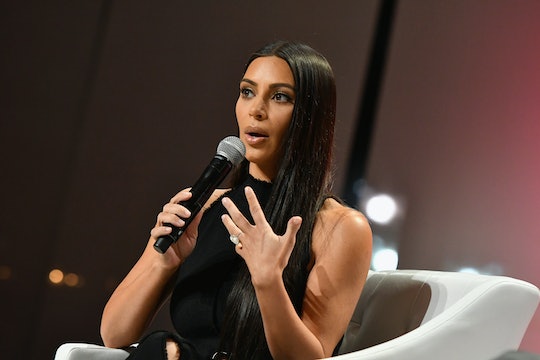 Kim K Revealed Her Thoughts On Whether She'll Run For President One Day, & They May Surprise You

Kim Kardashian-West is one very busy (and powerful) woman. From starring on her family's reality show, Keeping Up With The Kardashians, while being a mom to three children all under the age of 5 and simultaneously running her own makeup line, KKW Beauty, she really does it all. But, there's a possibility that she might become even more powerful and busier. Following a new interview with CNN's Van Jones, people might now be wondering if Kim Kardashian will ever consider running for president one day based on her very telling answers to some very important questions.

To some people, Kardashian-West and politics might be the two things that don't seem to go together. Some of those critics might even be wondering what a reality star knows about politics. But, as you might remember, many said the same exact thing about President Donald Trump, a businessman turned reality star who's now running the country.

That's not what I'm going for. I just want to help, starting with one person at a time. I think sometimes, if more people would just put their personal feelings aside and talk about really important issues that have to be discussed, they can get so much more done.

People have been asking me "Are you getting in to politics?" Like no. I'm still doing me. But I enjoy this. This has fulfilled my heart and since I feel so fulfilled, why would I stop that?

So people might never get to see the day when they call her Sen. Kardashian-West, but they could just as well see her using her platform and her power as an influencer to have a positive impact on this world. And that is just as important as holding a position of office.

Kardashian-West cited Trump's presidential win in 2016 as an inspiration for her husband during her interview with Jones, according to People. "It's the idea that anything can happen," Kardashian-West told Jones. She's right — anything can happen. Give it a few years and she (or her husband) could be running for office of any kind. As she said in her own words, "never say never."