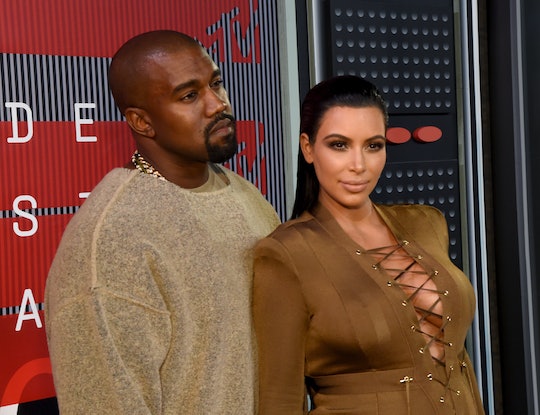 Will Kim Kardashian Use The Same Surrogate To Have More Kids?

According to The Hollywood Reporter, Kim Kardashian and Kanye West have chosen a surrogate to carry their third child. THR reported that Kardashian has previously expressed that she wanted to grow her family, but after two complicated pregnancies, she was considered too high-risk to carry a third child herself. So if she wants more children after this third baby, will Kim Kardashian use the same surrogate to have more kids?

According to Us Weekly, in June, West and Kardashian started to look for a surrogate, and their choice is now three months along in her pregnancy. That means Kardashian and her family will probably welcome the child in January 2018. Us Weekly also reported that the surrogate is a San Diego mom in her late 20s, referred to the couple by an agency.

Kardashian has had her share of pregnancy complications in the past that may have led her and her husband to go with a surrogate this time around, according to The Hollywood Reporter. According to W Magazine, one of those concerns included placenta accreta— a condition in which the placenta doesn't properly detach from the uterus during birth, which can be life-threatening. But whether the two will continue to have more kids after this pregnancy concludes, and whether they'd use the same surrogate to do so, is unclear.

According to Us Weekly, the woman acting as Kardashian's surrogate has served as a surrogate before. She's reportedly appeared in a promotional video about the process with her own family, and according to a TMZ report, the parents-to-be have agreed to pay her quite a bit to carry their next child.

So if the two decided to go with the same surrogate for any children in the future, they'd likely have to pay similar fees to repeat the process.

And if Kardashian does want to have more kids, and does want to use the same surrogate to have them, it sounds like any future babies would be in great hands. W Magazine reported that the standard stipulations the woman has to follow as a surrogate include no drinking, smoking, or drugs, plus no hot tubs or saunas, no raw fish, and no hair dye.

PEOPLE reported that in an episode of Keeping Up With the Kardashians, Kardashian said she wanted to expand her family months prior to rumors of the surrogate. In the same episode, Kardashian reportedly said:

I want my kids to have siblings and I want to know that I did everything I could to make this happen.

So it's clear that she at least wanted to have a third baby, and now, as long as everything goes smoothly with the pregnancy, she'll have one.

But whether Kardashian will want more children after having a third baby, and whether she'll choose surrogacy again if she makes that choice, isn't clear.

In the end, it's not really our business whether Kardashian and West have more kids following this third pregnancy. And we can't know for sure that they'd go with the same surrogate if they do choose to have more kids via surrogacy. Their first pregnancy with a surrogate is in its early stages as it is, so it's just too soon to theorize about any possible future kids for their corner of the Kardashian clan.