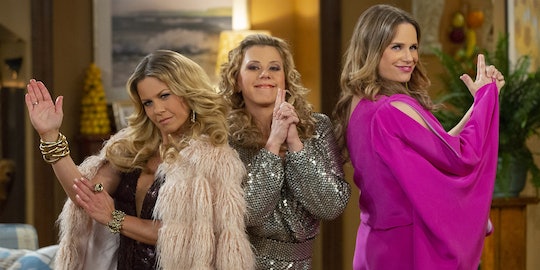 If you've been counting down the minutes until the Fuller House Season 4 premiere date, then get pumped. One of the bigger storylines fans are clamoring for has to do with Kimmy Gibbler's (Andrea Barber) pregnancy. But she's not carrying her own child, as a matter of fact, she's carrying for previous arch rival, Stephanie Tanner (Jodie Sweetin) — which is really something special. But the looming question remains: will Kimmy give birth on Fuller House Season 4?

The Netflix premiere of Fuller House officially happens on Dec. 14, and according to other cast members, a lot of the 18-episode season will focus on Kimmy's pregnancy (like the previous season). As for when she'll give birth, you may have to wait through all 18 episodes to the season finale. Barber posted a photo on Instagram that unveiled a behind-the-scenes look of her on-set wardrobe. From the looks of it, she's still very pregnant with the caption saying, "Final show night of Season 4 of #FullerHouse! This pregnancy has gotten out of control! Can’t wait for you all to see what happens!". So if Kimmy remains pregnant through the final taping, it would only make sense she give birth as the season ender.

Of course Kimmy won't be the only focus through the whole season but some of the exact details haven't been released. Candace Cameron Bure confirmed her character, D.J. Tanner, will be in a relationship with longtime on again-off again sweetheart since high school, Steve (Scott Weinger). I think I can speak for everyone and say "finally." Bure also told E! News whatever happens between her and Steve (good things, I hope), it won't be the central focus of Fuller House Season 4. Because again, Kimmy is pregnant and has to give birth at some point, hopefully.

To sum up where things stand before you watch the premiere, Season 3 showcased Stephanie's fertility problems when she found out she couldn't conceive naturally. That's a hard reality to face, especially when you know you want children. Stephanie and Jimmy (Adam Hagenbuch) look for a surrogate with Kimmy eventually agreeing to take on the task herself. Once that seed was planted, theories ran a bit amok — with a lot of people claiming she'll be having triplets due to the three successful embryos that were implanted in Kimmy (to increase the success rate for one baby to come out of it).

Barber spoke on The Today Show about the pregnancy saying, "It's very special to me that Kimmy gets to give this gift to Stephanie and her brother — the gift of life, the gift of their child," she said. "It just makes me feel great inside."

With all that said, you may have to wait a little bit longer for Kimmy's labor experience to happen. It's such a big event, you surely don't want the story to be too rushed to get to the baby. Sit back, enjoy the other episodes, and by the time you get to the birth, it'll feel like you've been pregnant for nine months — totally worth it.