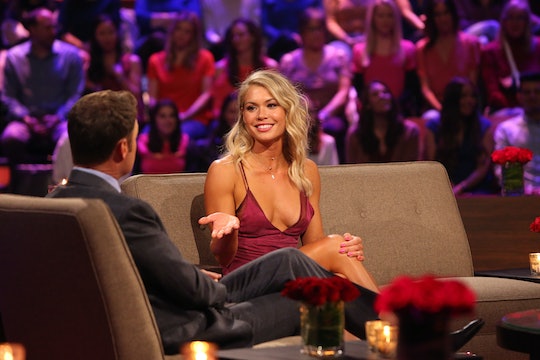 Krystal Will Definitely Stir Up Some Drama On 'The Bachelor: Women Tell All' Special

I don't know about the rest of you, but my favorite episode of The Bachelor every year is the Women Tell All special, in which all of the lead's rejected women get to confront him about their time on the show. This year, I'm particularly looking forward to hearing from the "villain" Krystal. So will Krystal be at the Women Tell All? Everyone wants to hear what she has to say regarding some questionable behavior she engaged in during her time at the show. Luckily, it looks like not only will she be present, but she'll be the star of the evening.

For a little recap on why Krystal is going to be so exciting to watch, she was known on the show for having little to no filter, finding sneaky ways to steal time with Arie away from the other women, and giving condescending toasts and lectures. All of this would have been simply irritating except that she dialed it up to 11 in Week 5 when the gang was in Fort Lauderdale, Florida. She was unhappy that after the bowling group date, Arie walked back his initial plan to only let the winning bowling team attend the after party. Once back in the hotel room the women revealed that Krystal sort of lost it on the way back, calling Arie a "liar" among other things. She proceeded to stay in her room to pout rather than attend the party.

But apparently the Women Tell All special will reveal that what she said was actually so much worse than what originally aired. Why the show chose not to air this in the actual show is still beyond me, but reportedly the special will show unaired footage of Krystal insulting Arie by saying some very sensor-worthy things, according to Variety. I don't know if we really need to go into the specific mechanics of what this means, but suffice it to say that Krystal probably isn't going to get a redemption narrative on the Women Tell All.

Previews for the special also promise that Krystal will have her time in the hot seat, where she will most likely be grilled by the other women in the house as well as by the leading man himself. I'm honestly really looking forward to seeing how she performs under this kind of pressure. These post-mortem interviews rarely go well for the official "villains" of the show, and I highly doubt that Krystal's case will be any different. However, if her villainy is entertaining enough she might just be on the roster for the next season of Bachelor in Paradise.

Previews promise that while Krystal is in the hot seat, her conversation with Arie will not go entirely smoothly. ABC does tend to release misleading clips in order to stir up anticipation, but I can hardly expect Krystal and Arie's conversation to be anything less than explosive. In the previews Krystal appears to defend herself by explaining that everyone was fighting for time. Whether in response to this or something else, Arie says rather derisively, "It's The Bachelor."

At this point, whether you love her or hate her, Krystal appears to have found her peace with how she's portrayed on the show, though she does say she felt "misunderstood." She said to People "It got to a point where I realized that I can’t control how I’m going to look on the show, so there’s no point exhausting my energy." You know what? That is an excellent stand to take. Maybe I'm starting to respect her a little bit? In any case, I'm excited to see how her conversation goes on Sunday, Feb. 25.