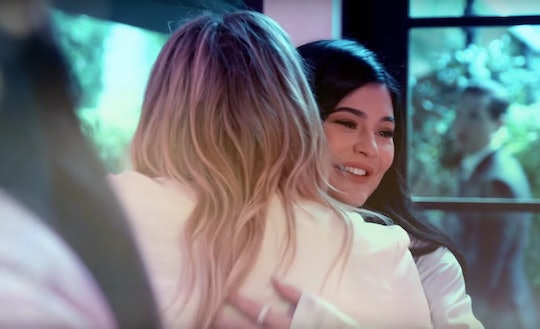 'KUWTK' Is Returning This Summer, But Can You Expect To See New Mom Kylie Jenner?

"Things have really changed." That's the sucker punch one-liner that Kim Kardashian West delivers on the latest trailer for Season 15 of Keeping Up With the Kardashians, and it seems to perfectly sum up what's in store for the family when the show returns this summer. The promotional trailer shows a series of clips from upcoming episodes, in which there is a predictable share of hugging, posing, and telling each other off. Though there is a lot that the world is anxious to get caught up on, one lingering question that remains is: Will Kylie Jenner be on KUWTK this season? Her absence last season left some fans wondering if she was done with the show for good.

The teaser opens with the six KarJenner women all posing together: Kris, Kourtney, Kim, Khloé, Kendall, and Kylie. Though the spotlight seemed to fall on Kim telling someone they shouldn't even "pretend to know what they are talking about" regarding an undisclosed but already interesting situation, Kourtney telling Kendall that she should check the internet to see what people say about her in comparison to her sister (way harsh, Tai) and of course, Khloé smiling and hugging her bump.

But upon close inspection, it's clear that Kylie does make a few subtle appearances here and there. There's one short clip of her driving in her car, and another of her hugging Khloé. It's not a lot, but it does seem to imply that Kylie could be making her return to the small screen.

The speculation is particularly heated given that Kylie was barely in any of the episodes last season. At the time, fans speculated that it was because she was hiding her pregnancy, and lo and behold, come Feb. 1 of this year, she revealed that they were absolutely right. After announcing that her daughter had already been born, Kylie shared a few words apologizing to fans for being MIA the past season, and for keeping this part of her life a secret for so long:

I'm sorry for keeping you in the dark through all the assumptions. I understand you're used to me bringing you along on all my journeys. my pregnancy was one I chose not to do in front of the world. I knew for myself i needed to prepare for this role of a lifetime in the most positive, stress free and healthy way i knew how. there was no gotcha moment, no big paid reveal I had planned. I knew my baby would feel every stress and every emotion so I chose to do it this way for my little life and our happiness.

While that is a completely understandable and rationale — especially given her and her family's status — it does beg the question of whether that philosophy will carry over into her life now that she's a mom.

Regardless of whether she'll be sharing more on screen, it's safe to say that fans will probably only see bits and pieces of Stormi's life, if any, given that she is cautious with what she shares about her new baby girl. People reported on Monday that Kylie said she would not be sharing photos of her daughter's face for the time being, after being criticized for cropping Stormi out of a photo. The last photo of her baby to appear on the 'gram was posted a few months ago, on April 19.

Being mindful of how much their children are in the spotlight is also in keeping with her sister's philosophies on raising their kids. Kim Kardashian West's children make limited appearances on the show, and Khloé also waited a month before revealing the first photo of her daughter, True.

However, that doesn't mean fans won't see anything to do with Stormi's life— or Kylie's, for that matter. It's apt to mention that Kylie did spend the nine months she was pregnant recording and putting together a video for her daughter, as it was literally titled, but really more so for her fans, as it was released when her birth was announced. This could mean that though she was seeking privacy for a time in her life, she's still very devoted to her fans and understands how much it means to keep herself somewhat in the public eye.

Though none of that really reveals the degree to which Kylie will be on her family's show this season, it seems that fans can count on her at least slowly making a return to the small screen, and maybe even more.