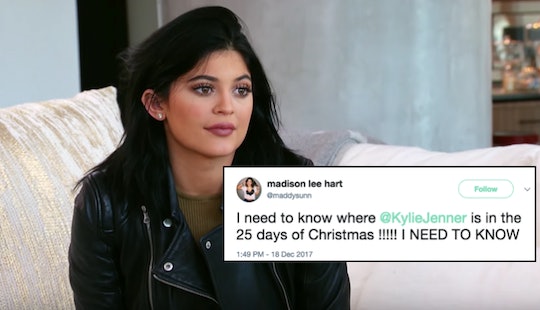 The countdown is on — there are six days left until Christmas and six pieces (or photos) left to be revealed in the Kardashian Christmas card. Each day, Kardashian family members (and grandchildren) have all made their appearances, wearing outfits made up of white tops and denim bottoms. And Tuesday's Christmas card reveal, according to People, featured the most people in it at the same time yet. The only grandchild missing was Kim Kardashian's son, Saint West, and the most notably absent Kardashian siblings were the three youngest — Rob Kardashian, Kendall Jenner, and Kylie Jenner.

With time running out, there is only so little time for them to make their grand appearance this year. And with so much anticipation surrounding the last and final day of the Christmas card reveal, the Kardashians have to be building up to something, right?

That build up could be related to Kylie's reported pregnancy, which fans are hoping will finally reveal Kylie and her alleged bump on the last day. After all, People reported in September that Kylie was expecting her first child with boyfriend, rapper Travis Scott. Since then, Kylie (as well as her whole family) have not addressed the rumors and Kylie herself has scaled back on public appearances, adding some fuel to the fire surrounding her rumored pregnancy.

Some Twitter users think that the final photo in the Kardashian's Christmas card, on Dec. 25, will have to do with confirming her rumored pregnancy. And they are getting really antsy over it.

The Anticipation Is Killing People

Some People Are *Certain* A Big Reveal Is Coming

This theory that Kylie is announcing her rumored pregnancy through the Christmas card could very well be possible. According to People, Kylie is reportedly due in February. If this is the case, then Kylie is running out of time to confirm that she is expecting before her due date arrives. The Kardashian Christmas card would be the best outlet for her to reveal the news, confirming it in a photo just a little bit over a month before the baby arrives. Not to mention, the Christmas card this year has been very grandchild centric, featuring Kim and Kourtney's own kids. Why wouldn't the Kardashians save the newest and most anticipated grandchild for the last day of the Christmas card?

But on the other hand, people were disappointed when Khloé made her debut in the Christmas card earlier in the month. Like Kylie, Khloé is reportedly pregnant, but when she was spotted in the card on Dec. 13, fans quickly commented that there was no pregnancy bump to be seen. If Khloé didn't confirm or deny her rumored pregnancy in this card, who is to say that Kylie won't do the same?

But it is almost guaranteed that Kylie will be in this year's card. This is because when the card was shot at Milk Studios in Los Angeles in early November, Kylie was spotted there with her family, according to E! News. If Kylie is pregnant, it could be likely that it will be revealed or announced in the Christmas card. But there are just six days left for the Kardashians to make that announcement. So really, Christmas can't come soon enough.