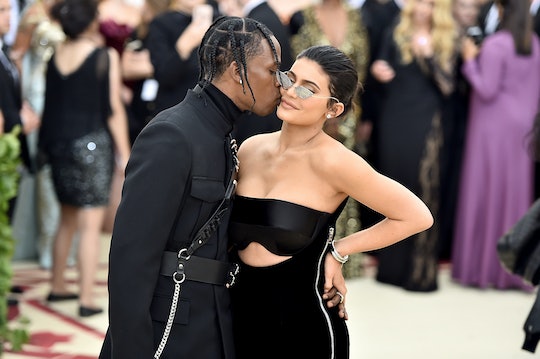 A lot has happened in the Kardashian world since Season 14, including arguably the biggest moment of the past few years: Kylie giving birth. Will Kylie's pregnancy be on KUWTK Season 15? Maybe, but considering how private she was in real life, it's hard to tell.

Kylie was already seen pregnant on KUWTK at the end of Season 14 — after being absent for most of the season because of it. Kylie also kept mum about it on social media. Considering she's partly built her empire off of Instagram and Snapchat, this was a bold move. Kylie gave birth to her daughter Stormi on February 1, and posted on Instagram days later explaining that she wanted to keep her pregnancy private.

I’m sorry for keeping you in the dark through all the assumptions. I understand you’re used to me bringing you along on all my journeys. My pregnancy was one I chose not to do in front of the world. I knew for myself I needed to prepare for this role of a lifetime in the most positive, stress free, and healthy way I knew how. There was no gotcha moment, no big paid reveal I had planned. I knew my baby would feel every stress and every emotion so I chose to do it this way for my little life and our happiness.

Keeping this in mind, Kylie may be away from the cameras for most of Season 15. Filming began in October, five months into her pregnancy anyway. When filming concluded is unknown, but probably continued after Stormi's birth. Even months into Stormi's life, Kylie keeps her mostly off of social media, with a few sweet exceptions.

For the most part, though, it seems that Kylie truly wants to keep this part of her life private which is why she and her new daughter may not be featured that much this season. In an interview with Us Weekly, Kris Jenner did say that her daughter Kylie doesn't go anywhere without Stormi, so perhaps if Kylie is featured in the show, Stormi won't be far away. There are, of course, no guarantees though.

Kylie may be following the lead of her older sister and new mom herself, Khloé. Khloé gave birth to her daughter, True, in April — two months after Kylie. E! cameras were not present for Khloé's birth according to a source, but they also said her family members may have had their phone cameras. Regardless, Khloé wanted privacy for her special moment, and Kylie may have been the same way. I can't imagine how tiresome it must be to have every moment filmed when you're not giving birth.

Given that pregnant Kylie made an appearance on the finale of Season 14 of KUWTK, I don't think the entire season will be void of her. I do believe, though, that fans will not be seeing as much of her or Stormi as they might otherwise expect. At the end of the day, this is Kylie Jenner and her infant daughter's life, so she can do whatever she wants. If fans are disappointed this season, I'm sure there will be plenty of seasons to come to see more of both Kylie and Stormi.