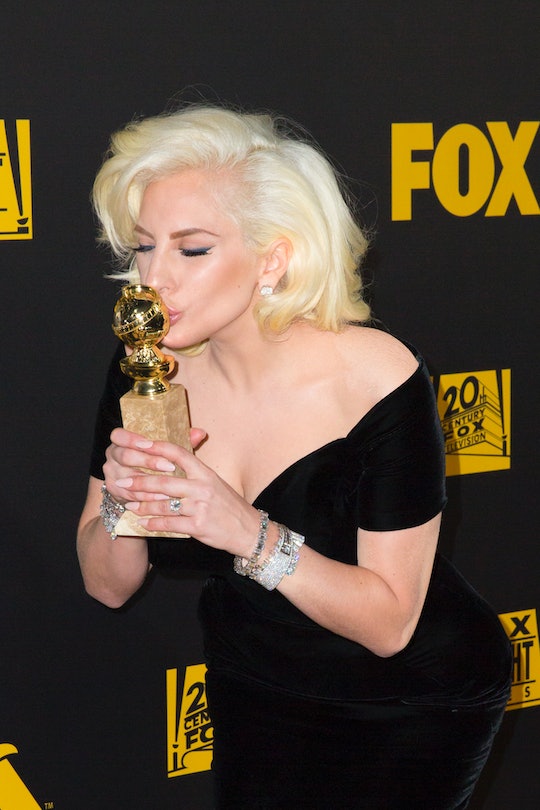 Will Lady Gaga EGOT This Year? It’s About Damn Time

Lady Gaga's song "Til It Happens To You," from the documentary The Hunting Ground was nominated for an Oscar for Best Song Thursday morning. If she wins, Gaga will be one step closer to EGOTing. EGOT is the abbreviation for Emmy, Grammy, Oscar, Tony — winning all four is the holy grail of Hollywood, and Gaga is dangerously close to taking 'em all home.

Gaga will be just a step away if she wins the Oscar on Feb. 28. She has won multiple Grammy awards, cleaning up most notably in 2011 for Best Pop Vocal Album for The Fame Monster and Best Video and Vocal Performance for "Bad Romance." She has won other Grammys for her album Fame and her songs "Poker Face" and "Cheek to Cheek," her collaboration with Tony Bennett.

Gaga's was nominated for Emmy awards in 2011 for Outstanding Variety, Music, or Comedy Special for her live Monster's Ball concert on HBO and for her 2015 special Cheek to Cheek Live!, but she didn't win.

If she's gotten there before, it's bound to happen soon enough. And it feels like the stars have aligned because this year, an EGOT could be hers one day, even if it isn't this year. Plus, judging from the way awards season has gone so far, a Tony nom can't be that far off. Her recent work with Tony Bennett and new old-Hollywood-like persona means she could start being considered for some stage work.

Her fans are ready for her to start racking up more awards:

But before we get ahead of ourselves, Gaga needs to take home the Oscar win for "Till It Happens To You." Two out of four ain't bad so far. Go, Gaga!