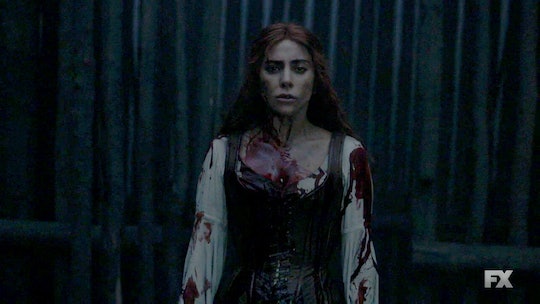 Will Lady Gaga Return To 'American Horror Story: Roanoke'? Probably Not As Scathach

Apparently, we've got the biggest twist in American Horror Story's history in store for us in the upcoming installment, "Chapter 6." Ryan Murphy and several of the stars have been previewing the fact that the second half of the season is about to get bonkers for weeks now, but we finally got some hard info about the twist. Specifically, several of the actors will be switching roles entirely for the season's second half. But while some of the actors switching roles were named, a few went notably unmentioned, like Lady Gaga. Will Lady Gaga return to American Horror Story: Roanoke?

As we all know by now, Lady Gaga first made her Season 6 debut in "Chapter 2" as the "Witch of the Wood," a mysterious character who held serious sway over Kathy Bates' Butcher. Throughout the first few episodes in which she appeared, we learned more and more about how the Butcher came to be bound to both "her" Roanoke land and to the sketchy woodland lady.

But we didn't learn Gaga's character's name or her backstory until "Chapter 4," which revealed that she was Scáthach, a formerly human Englishwoman who immigrated to American way back when and became some sort of goddess-demon-witch-nymph through a vague and unclear process in which she slaughtered some colonist soldiers to escape and satiate "ancient gods." So, basically, we still know little to nothing about her, other than the fact that she's super spooky, has a great accent, and desperately needs a shower.

Scáthach was suspiciously absent throughout "Chapter 5's" seemingly-final showdown between the Millers and the Butcher. It was odd that she was missing, especially since literally every single other character connected to the Butcher appeared, all of her victims and minions except for Edward Mott, attempting to corral Shelby and Matt out of the house to their deaths. Though the Butcher didn't (and probably can't) die, the Miller family managed to escape and their "Roanoke nightmare" apparently came to a close. Or did it?

If we see Lady Gaga again, it's highly doubtful that she'll appear in her role as Scáthach. This is clear because the cast was split into two groups for the first half of the season – the "real" characters and the "dramatic re-enactment" actors. From what we can tell, Gaga was part of the second group – she wasn't the "real" Scáthach, but rather was just an actress playing the part of Scáthach for the purposes of the show-within-a-show "My Roanoke Nightmare." Unless the "real" forest witch appears in the back half of the season and is a doppelgänger of the reenactment actress played by Lady Gaga, I can't think of any way we'll see her in that role again.

But as of yet, we have no idea whether Gaga will appear at all in the last five episodes. Murphy didn't mention her as one of the actors who had a different part in the second half of the season, which could mean that she just doesn't show up anymore at all, in a new or old role. In a separate conference with press, Murphy did explain that the singer-actress didn't have much time to devote to filming AHS this season given the schedule with her new album, but that he felt strongly about including her as Scáthach. He also confirmed one fan theory – that Scáthach was the original Supreme (throwing it way back to Coven), which makes her a hugely important figure in the show's overall mythology.

Given Murphy's comments, it's unfortunately unlikely that we'll see Lady Gaga at all (as Scáthach or anyone else) in the second half of the season. But, of course, there remains the possibility that she'll make a surprise appearance here or there. We can hold out hope!