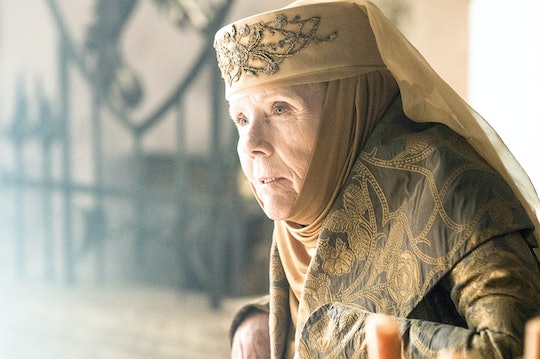 Will Lady Olenna Die On 'Game Of Thrones'? Her Fate Is Sealed

After storming Highgarden, Jaime Lannister chose to give Olenna Tyrell a quick and painless death. Instead of making her suffer as Cersei would have, he offered Olenna poison to drink. But "The Queen's Justice" ended before viewers actually saw her death take place. So will Lady Olenna die on Game of Thrones?

Whenever a character dies offscreen, it's natural to question whether their death actually happened. Game of Thrones has been known to send characters off for season after season without revealing their fate, only for them to pop up alive and well (like the Hound). The situation with Olenna feels different, however. It seems almost certain that she will die, for a few reasons.

Olenna made a major confession to Jaime right after drinking the poison he gave her. She finally revealed to him that she had arranged for Joffrey's death, though she hadn't known how horrifying it would be; she was grateful that her death by poison wouldn't be quite so painful. If Olenna didn't die after that, then odds are Jaime wouldn't have let her live. But he stormed from the room, seemingly secure in the fact that the poison he provided would do its job.

It's also clear that Game of Thrones is cleaning house as it edges closer to the end of the series. Ellaria and the Sand Snakes were dispatched with relative ease over the course of the last two episodes, taking Dorne off the map for now. Olenna was the final major remaining member of House Tyrell after Cersei blew up most of her family at the Sept of Baelor, so it was really a matter of time until she was killed as well. Cersei is killing off all of her remaining enemies, and Olenna had been on her list for a long time.

The focus is beginning to narrow on the show, whittling things down to the biggest players on the board. Daenerys, Jon Snow, and Cersei are moving closer to a showdown for the throne with every episode that passes; they're the key figures here, so each and every minor threat has to be taken care of to make room for their eventual battle. Olenna was one of the best, but she simply had no place in the narrative anymore.

Olenna presumably died after the credits rolled, which technically makes her death unconfirmed for the moment. But it seems like a guarantee that she's a goner. The Queen of Thorns finally met her end on Game of Thrones, but at least she did it with style.